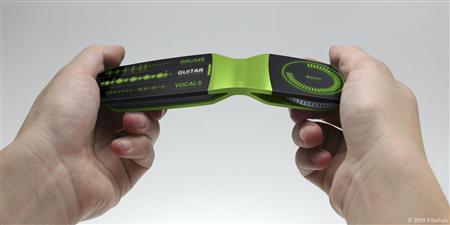 Design firm Pilotfish has announced plans for an advanced music phone, Ondo, that will let you record and edit music on the go:

Pilotfish said its concept — which will reach the market a few years from now at the earliest — will enable good quality recording of three separate sound tracks and allow editing of the music by physically twisting and bending the phone.

The phone’s main touch-screen, which is similar to today’s folder phones, consists of three ‘sticks’ that can be removed and separately clipped onto a musical instrument or a person to capture live sound.

According to Pilotfish, the music phone should be “should be available in 2-3 years.”

Would you be interested in a dedicated music phone?

One thought on “Future Phone Lets You Edit Music”