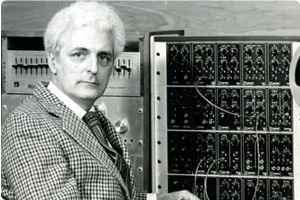 The Museum of Making Music and The Bob Moog Foundation have announced Waves of Inspiration: The Legacy of Moog, a special exhibition set to run from August 29, 2009 – April 30, 2010 at the Museum’s facilities in Carlsbad, California. The exhibit is the first of its kind, marking the first public display of the artifacts from Bob Moog’s archives.

The exhibition, which highlights the inventor’s career and the impact that it had on the world of music, will feature rare vintage synthesizers and other related Moog instruments and memorabilia from the Bob Moog Archives and from various private collections.

A custom video presentation created by Moog historian and exhibit consultant Brian Kehew will form a central part of the exhibit. The exhibit will explore the numerous musicians, engineers and colleagues who played a vital role in the evolution of the Moog sound and the relationship between and the inventor/toolmaker and the musician, as well as the genesis of a variety of musical interfaces.

The instruments featured in the exhibit will trace the history of Moog’s work. The exhibit begins with vintage theremins and a prototype of the first modular synthesizer, which originally belonged to Herb Deutsch, an experimental music composer from Long Island whose 1963 meeting with Dr. Bob Moog would help define the synthesizer as a musical instrument, and set a course for the future of electronic music. Other excellent examples of modular instruments from the late 1960s and early 1970s will be on exhibit, most notably Keith Emerson’s famous “Monster Moog” will be featured for the first time as a part of the museum display.

The exhibition will highlight and explore crucial steps that were taken in the advancement of the Moog synthesizer during the years following the development of the modular system. The display will showcase a sequence of models that led to the emergence of more compact instruments, such as the Minimoog. The main impetus behind this tremendous work was Moog’s vision to create a portable electronic music studio on which musicians could compose and perform.

The opening weekend (August 28 -30) will kick off with a launch of the Moog exhibition featuring intimate musical performances by Keith Emerson and Erik Norlander and talks by Larry Fast and Brian Kehew.

Tickets for the opening weekend events can be purchased on the Museum’s website beginning August 3, 2009. The Museum is planning an array of exciting programming throughout the seven-month exhibition with panel discussions featuring people who collaborated with Moog throughout his lifetime, and concerts featuring top synthesists. The ultimate goal of this exhibition and its programs is to highlight Moog’s career while celebrating synthesis as a whole.

Bob Moog (1934-2005) was a pioneer in the field of electronic music, inventing the Moog synthesizer in 1964. His invention made synthesis accessible to musicians for the first time and in doing so provided them with new realms of sonic expression. The instrument revolutionized the face of music and was used by such early synthesists as Wendy Carlos, Keith Emerson, Rick Wakeman, Stevie Wonder, Chick Corea, Herbie Hancock, Jan Hammer, and more.

“Bob Moog was one of the great visionaries of our time. His ideas far transcend just music, and to this day continue to have impact on everything from rock to rap to quantum physics” – Billy Corgan (Smashing Pumpkins)

Moog’s career spanned over 50 years and his work left an indelible impact on music, musicians and music-lovers alike. Bob Moog’s unique legacy is one of expanding musical expression through innovation and inspiring musicians to explore the boundaries of sonic reality. Tens of thousands of musicians worldwide were, and continue to be, inspired by Moog’s work, and the sonic palette it provides.

Bob Moog was awarded two GRAMMYs for his work: the NARAS Trustee’s Award in 1970 and Award for Technical Achievement in 2002. He also won the Polar Music prize in 2001 from the King of Sweden and numerous other prizes that recognized his contributions.

One thought on “The Legacy of Moog Exhibit Announced; Will Feature Keith Emerson’s Monster Moog”