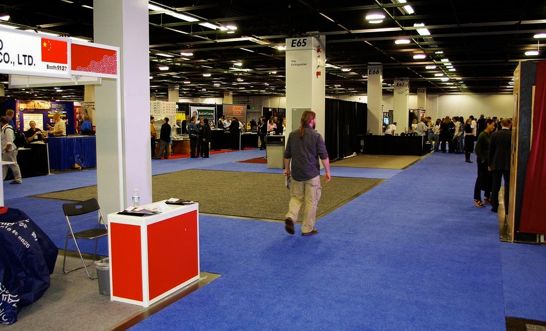 What may not be obvious from our coverage, though, is how hard the NAMM Show has been hit by the recession.

The above shot captures one view of the basement, which looked pretty pathetic. The basement traditionally features new and upcoming vendors. This year, it was half empty, despite the fact that NAMM blocked off large sections of the floor. On the main floor, too, it was obvious that NAMM had to block off large areas because of reduced vendor presence.

It was hard not to come away from NAMM thinking that the music industry is getting its ass kicked by the recession.

Instead, people were talking about companies that are sticking their necks out, innovating and shouting about what they are doing. Companies like Teenage Engineering and their OP-1; Eigenlabs and their new Eigenharp Tau; and Mungo Enterprises and their State Zero modular polyphonic synthesizer.

If traditional music retailers don’t start thinking about how they’re going to adapt to and adopt things like the iPhone, they going to be cut out of the picture.

NAMM also needs to find a way to capture the energy of DIY culture.

Music DIY projects are more popular than ever – and there’s an opportunity for music retailers to help people out and make some money along the way. There’s a need for cheap DIY materials – like MIDI controller building blocks and instrument kits.

There’s also an opportunity for the music industry to embrace new ideas that come out of the DIY community. Consider how many imitators the monome has spawned in the last year.

NAMM is still the most exciting annual music technology event in the US. The show is going to have to adapt, though, if it wants to maintain its position.