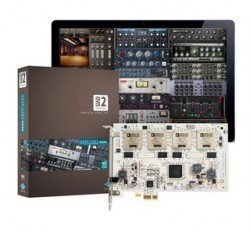 2011 NAMM Show: TC Electronic and Universal Audio have announced a crossgrade option to the new UAD-2 for registered PowerCore users worldwide, as TC Electronic has decided to cease development of the PowerCore product range.

TC Electronic will continue to sell all of the existing PowerCore plug-ins and hardware variants and will keep offering user support for the platform.  In addition, TC Electronic has announced a collaboration with Universal Audio in order to offer a crossgrade program, allowing registered PowerCore users to receive a pack of up to $1,300 worth of UAD Powered Plug-Ins free of charge when registering their newly purchased UAD-2 DSP Accelerator Package.

The crossgrade offer is valid from February 1, 2011 to June 30, 2011. In order to qualify for the crossgrade offer, PowerCore users must register a new UAD-2 package, including the recently announced UAD-2 Satellite Firewire DSP Accelerator, within this period. Further, the offer is only valid to new users, i.e. users that are new to the UAD Powered Plug-Ins platform.

PowerCore users, who qualify and want to make use of this offer, simply have to register their newly purchased UAD-2 DSP Accelerator Package via Universal Audio’s website. During the registration process, they just enter the serial number of their PowerCore unit which will trigger the release of the corresponding UAD Powered Plug-Ins.