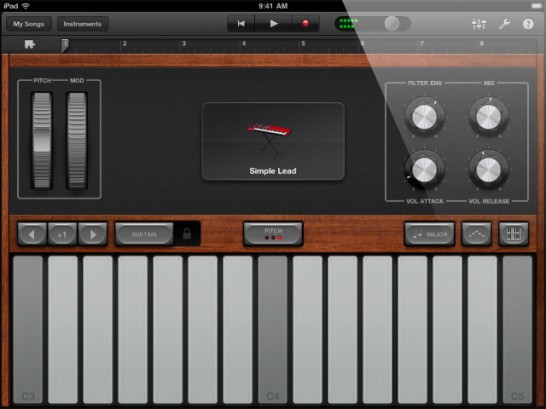 Apple also introduced two new iPad apps: iMovie and GarageBand for iPad, both available for $4.99 each. GarageBand turns the iPad into a fairly powerful mobile DAW.

The announcement, though not especially surprising, may send the tablet competition back to the drawing board, because the alternatives are higher priced and fail to deliver mainstream features that leap-frog Apple’s offering. They also face the liability of empty app stores, compared to the iPad’s 65,000 apps.

Tech analysts at ZDnet are calling the iPad 2 upgrade “enough to kill the competition.”

While the iPad 2 platform is still a flawed platform for musicians – we have to agree with ZDNet. Based on what’s currently available, expect the iPad 2 to further establish the iPad as the dominant mobile music making platform.

The last few months have seen an explosion of increasingly sophisticated iPad music apps. If this continues, it’s safe to assume that some of these apps will develop into mature tools in 2011.

What do you make of today’s Apple announcements, and the state of alternatives for mobile music making?

Here’s a comparison of some of the current tablet computers:

41 thoughts on “Does Apple’s iPad 2 Announcement Make The Competition Irrelevant For Musicians?”