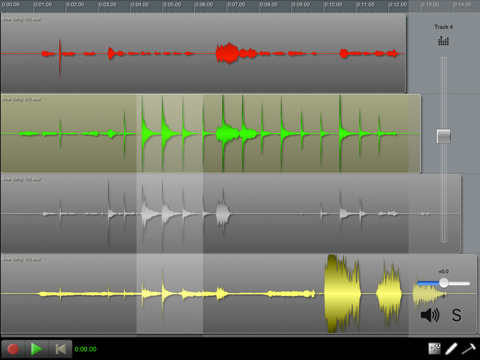 N-Track Studio, a DAW for Mac & Windows PCs, has made the jump to the iPad.

n-Track Studio is an audio multitrack recorder that turns your iPhone, iPad or iPod touch into a mobile recording studio.

You can record and playback a virtually unlimited number of audio tracks and mix them during playback. You can also edit, cut, copy and paste, zoom and drag waveforms.

All the audio tracks are saved as standard wave files and mixed “on the fly” during playback.

You can mixdown the recorded song in standard .wav format which you can later open with any 3rd party audio application or use to create CDs or mp3 files, or export the song in multitrack .sng format and open it with the desktop (Mac and Windows) version of n-Track.

Takes advantage of dual-core CPU performace when used on the iPad 2.

That makes two multi-platform DAWs debuting today for the iPad. Will 2011 be the year when iPad music workflows get real?