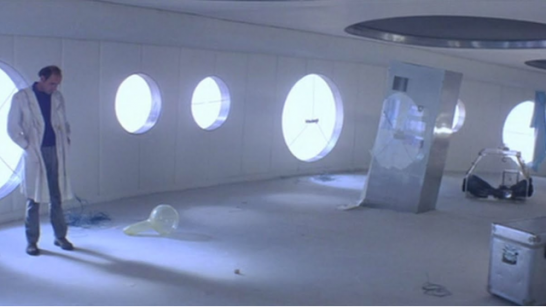 The Solaris soundtrack is unusual in that it was created using the rare ANS synthesizer, which used photo-optic recording to translate sound into images, or to translate drawn images into sound:

In this case the sine waves generated by the ANS are printed onto five glass discs using a process which Murzin (an optical engineer) had to develop himself. Each disc has 144 individual tracks printed onto it, for a total of 720 microtones (discrete pitches), spanning 10 octaves. This yields a resolution of 1/72 octave (16.67 cents). The modulated light from these wheels is then projected onto the back of the synthesizer’s interface. These are arranged in a continuous swath vertically, with low frequencies at the bottom and high frequencies at the top.

The user interface consists of a glass plate covered in non-drying opaque black mastic which constitutes a drawing surface upon which the user makes marks by scratching through the mastic, and therefore allowing light to pass through at that point. In front of the glass plate sits a vertical bank of twenty photocells which send signals to twenty amplifiers and bandpass filters, each with its own gain adjust control. It is akin to a ten-octave equalizer with two knobs per octave. The ANS is fully polyphonic and will generate all 720 pitches simultaneously if required (a vertical scratch would accomplish this).

Downoad the Solaris soundtrack at Rootstrata.

You can find out more about this early synth in this video about the ANS Synthesizer.

Thanks to reader Paul Ulrich for suggesting this post and gizmodo and wikipedia for additional info.