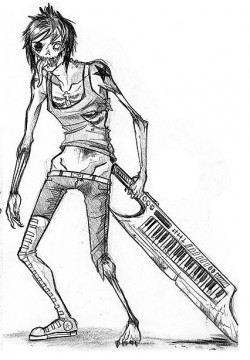 The end is here – at least it is according to followers of radio host Harold Camping.

He predicts that at 6 pm local time, we’ll have earthquakes and then about 3% of the world’s population will be raptured. For everybody else, it’s 5 months of hell on earth.

Meanwhile, the US Center For Disease Control has independently issued recommendations for how to prepare for the coming Zombie apocalypse.

Between zombies and the end of the world, it’s a good time to plan ahead and pick the one synth that you’ll be taking with you. You don’t want to be sitting, debating the one synth to take with you, when a zombie is coming after your brains.

My pick? My Sequential Circuits Pro One.

There are some downsides to the Pro One, of course. The lightweight construction means that it’s pretty much useless as a weapon. A Moog Liberation might be better for that. And, if things get really apocalyptic, a battery powered synth might prove to be a better choice.

What’s your choice of synth for the apocalypse?

Image: Zombie with a Keytar by Kendra Phillips

34 thoughts on “The End Of The World Is Coming. Which Synth Are You Taking With You?”