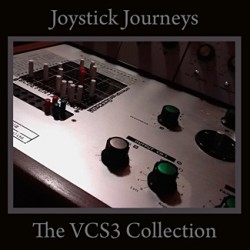 Here’s what they have to say about the new sample library:

Welcome to the weird, whacky and wonderful world of the EMS VCS3. This unusual instrument was developed by EMS in the late Sixties and intended as a portable electronic music studio. Unlike more famous instruments of the day, the VCS3 was initially released without an accompanying keyboard.

As such, it was embraced (often by those under the influence of certain mood enhancers) as a resource for special effects. It became an electronic voice for space rockers, psychedelic bands and sound designers. The VCS3 and its big brother the Synthi 100 were used by the BBC Radiophonic Workshop to create effects for many programs, including of course, Doctor Who.

With clever marketing (“every nun needs a Synthi”), the VCS3 and its electronically identical suitcased brother the Synthi A became mainstays of the European rock scene.

Joystick Journeys – The VCS3 Collection is available now for US $20.