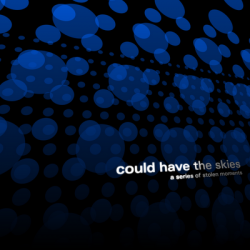 Here’s what Davidson has to say about the Could Have The Skies:

The same rules apply as the previous Escape Philosophy releases; I don’t have a preconceived idea what I’m going to play when I sit down to record, but I try to visualize something or express a feeling or memory.

I have a short period in the morning when the house is empty. The emphasis is on capturing a moment, including the hesitations and mistakes which I feel are more interesteing than pristine sound quality or the perfect take. You’ll hear the familiar birds from the previous albums, body movements, dampers rising of the strings, etc.

Some of the piano music from Escape Philosophy was once described as pointillistic which I thought was pretty, and apt. There is guitar and orff chime bars on one track but otherwise, it is all piano, often manipulated by the monome grid and arc.

You can preview the tracks below and you can download the album in exchange for a tweet or using a ‘name your price’ model.