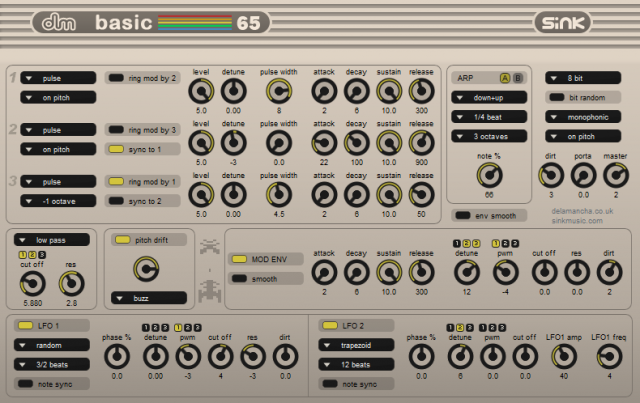 de la Mancha has released basic 65, a monophonic synth, inspired by the Commodore 64 and its legendary SID chip:

Building on the waveforms and signal path of this famous chip, basic 65 adds further features and options to take things a step further.

The double arpeggiator allows complex versions of that retro 8-bit game sound and the modulation options inspire experimentation via the mod envelope and 2 comprehensive LFOs. Pulse width modulation, ring modulation and oscillator detune/sync are key ingredients in the signature sound. Throw in some pitch drift, bit drift, a sprinkle of dirt and randomisation and you have a wide range of lofi, chiptune, retro-tastic sounds at your disposal.

This version is the update to the popular basic 64, redesigned from scratch, with many improvements, new features and all new presets. basic 65 was co-developed with sink, who also made the amazing presets.

One thought on “New Synth For Windows Based On Commodore 64, basic 65”