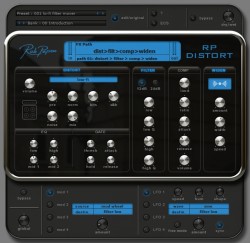 Rob Papen has released RP-Distort, a new distortion effect for Windows and Mac, as a freebie for existing customers.

The distortion unit inside RP-Distort can be combined with an analog modelled filter, compressor and widener unit.

These units can be re-ordered, and also can be turned on or off. So in case you only want an analog modelled filter… RP-Distort can offer this.

On top of that, the controls can be modulated using MIDI sources or by one of the 4 built-in LFO’s that can sync to your host tempo..

The distortion unit offers 22 distortion types included ring modulator and lo-fi. Inside this section you can also find the EQ and noise-gate.

Papen calls RP-Distort “a wicked FX unit that will distort or alter your tracks in an inspirational way.”

RP-Distort is a free download, if you own or buy BLUE, Predator, RG, SubBoomBass, RP-VERB, RP-Delay, Albino3 or Punch. This deal runs through the end of December 2011.