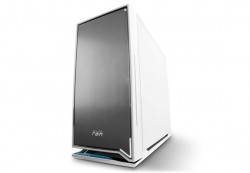 Rain Computers has released the Nimbus M2, ‘do-anything’ Windows multi-media workstation. The Nimbus M2 offers a 6-core processor, NVIDIA Quadro 600 Workstation Video Card and 8GB or 16GB of memory out of the box.

“The idea was to design the Swiss Army Knife equivalent of a workstation. Something just as good at crunching guitar tracks as it was at figuring out the lighting in a 3D model.” commented Kevin Jacoby, Rain Computers CEO. “But we also wanted it to be really affordable so we could offer it to the next generation of creative geniuses. We definitely got there and that’s the part we’re most excited about.”

Of particular note is the ability to expand the Nimbus M2 to 32 gigabytes of memory, the external hard drive bay allowing for a fast “hot swap” drive to be installed, and a cooling system that combines modular cooling fans with advanced acoustic insulation.

Nimbus M2 Multimedia Workstation is available now starting at $1599 through the Rain Custom Shop at RainComputers.com.