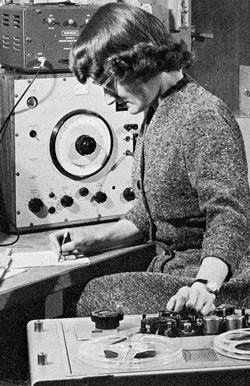 The Science Museum (of London) wants you to remix the sounds of electronic music pioneer Daphne Oram and have your track judged by Brian Eno, DJ Spooky and The Wire.

Here’s what they have to say about the OraMIX contest:

In the 1960s, Daphne Oram developed a ground-breaking music technique she called ‘Oramics’. With her home-built ‘Oramics Machine’, Daphne made music for TV shows and commercials, but she dreamt of broadcasting live Oramics concerts through a network of fibreoptic cables, an idea that sounded like science fiction at the time.

This ambition, so typical of that era of boundless optimism for science and technology, was paralleled in the use of satellites to broadcast Our World on 25 June 1967, the very first television production performed and broadcast live from studios across the world.

Imagine that the producer of Our World, the 1967 TV programme that first linked the world via satellites, had commissioned Daphne Oram, the pioneer of electronica, to make its soundtrack.

You don’t have to limit yourself to 1960s style. Use the stems to make the piece in whatever genre you fancy.

4 thoughts on “Daphne Oram Remix Contest – Get Your Oramics On!”