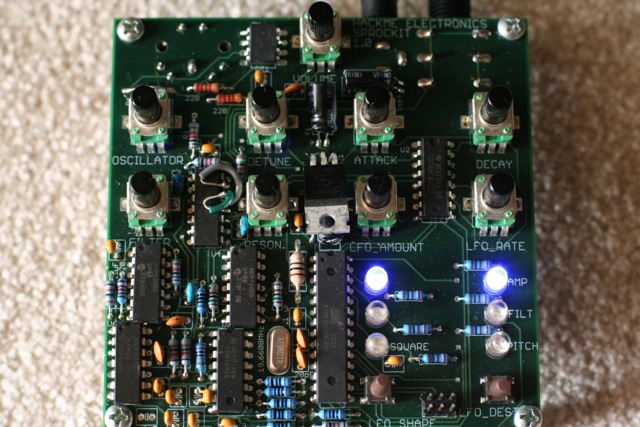 Matt Heins of Hack Me Electronics has announced a new synth for 2012, the Sprockit mini-synth.

Sprockit is a pint-sized version of Hack Me’s Rockit synth.

Here’s what Heins has to say about the Sprockit synthesizer:

My goal with Sprockit it to take a lot of Rockit goodness and compress it down to something smaller and a bit cheaper. I’m achieving both goals by having a very dense design and by reducing some of the features.

Sprockit is 4?x4? versus Rockit’s 5.1?x8.6?, so it’s substantially smaller, like pocket sized (I would’ve called it Pockit Rockit, but there are some products out there already). There are obviously fewer knobs, LEDs, and switches. All of the control parameters are still there though and will be accessible via an external MIDI controller.

The microcontroller is downsized from an ATMEGA644 to an ATMEGA328. I’m also incorporating a lot of the things that I’ve learned from doing Rockit and rolling those improvements into Sprockit. This image is my first prototype and I’m well into prototype two, which will be much improved.

Heins is planning to have Sprockit ready for a workshop with Dorkbot Chicago at the end of February.