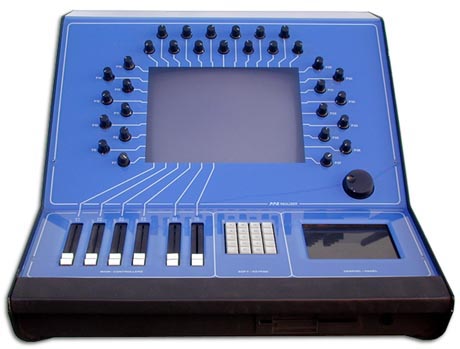 Big City Music has just listed a new vintage synth for sale, which could be yours – if you’ve got an extra $25,000 lying around.

The PPG is unusually rare – it’s thought that only two were ever made.

Here’s what Vintage Synth has to say about the PPG Realizer:

The Realizer was very unique in its effort to combine sound production, emulation, processing, recording, sequencing, and mixing into one all-digital system. A concept that was very much ahead of its time considering that we’re only now seeing affordable software-based devices that can offer this type of environment.

As for synthesizing sounds, the Realizer features an analog model, an FM model, wavetable synthesis, and a sampler. They were designed to show an image of a Minimoog, or other synth on their built-in monitor. Then you could control the Minimoog knobs with the controls around the screen of the Realizer.

Unfortunately, the price tag of $65,000 didn’t exactly make it a marketer’s dream. It was the last thing that PPG made, and they went out of business a short time later.

Yes, your phone packs more power than this did – but it’s still a pretty epic collector’s piece.