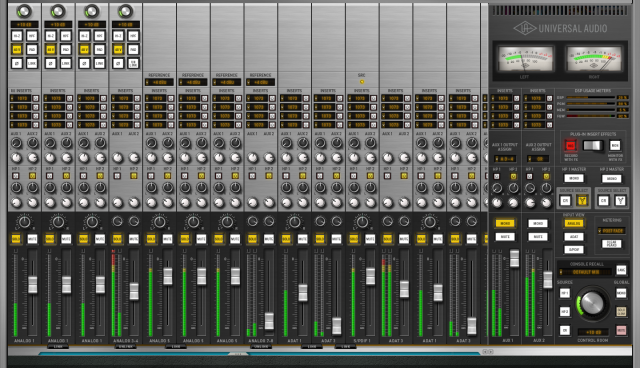 With Apollo, music producers and performers can track through UAD-Powered Plug-Ins in real time, via a professional 18 x 24 FireWire/Thunderbolt™-ready audio interface that with 24-bit/192 kHz sound quality.

“Apollo is the culmination of 10 years of analog and digital audio development here at UA,” said Bill Putnam Jr., Universal Audio founder. “In many ways, it’s brought the analog and digital sides of our company together. With Apollo, we’re delivering the sound, feel, and flow of analog recording with all the conveniences of modern digital equipment, including next-generation Thunderbolt technology.”

Apollo differentiates itself from all other audio interfaces, however, via its onboard UAD-2 DSP Acceleration. This onboard processing allows for recording through UAD-2 Powered Plug-Ins — with nearly instant sub-2ms latency — so that music producers can monitor, audition, and “print” audio using a range of popular analog emulation plug-ins from Ampex, Lexicon, Manley, Neve, Roland, SSL, Studer, and more.**  The onboard UAD-2 processors are also available for mixing and mastering, offloading processing from the host computer.

The Apollo High-Resolution Audio Interface will be available in both DUO CORE and QUAD CORE processing formats (with either two or four Analog Devices SHARC processors, respectively). Apollo will be shipping in the first quarter of 2012, with an estimated “street” price of $1,999 (DUO processing model) and $2,499 (QUAD processing model). Apollo’s Thunderbolt Option Card will be shipping in the first half of 2012, with pricing TBD.