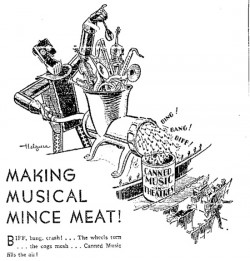 Reader Ken Palmer pointed out an interesting Smithsonian article about how emerging technology was thought of as a threat to musicians’ livelihood – way back in the 1930s!

“I remember when it was argued that synthesizers and samplers were going to put many musicians out of work,” notes Palmer.

But this alarmist view of technology in music goes way back to the early 20th century.

Joseph N. Weber, the president of the American Federation of Musicians, made it clear in the March, 1931 issue of Modern Mechanix magazine that the very soul of art was at stake in this battle against the machines:

The time is coming fast when the only living thing around a motion picture house will be the person who sells you your ticket. Everything else will be mechanical.

Canned drama, canned music, canned vaudeville. We think the public will tire of mechanical music and will want the real thing. We are not against scientific development of any kind, but it must not come at the expense of art. We are not opposing industrial progress.

We are not even opposing mechanical music except where it is used as a profiteering instrument for artistic debasement.

That debasement came in the form of the evil robot grinding up instruments in a meat grinder, above right.

If you know of any other humorous vintage perspectives on music technology, let us know!

You can muffle the drum, and you can loosen the strings of the lyre, but who shall command the skylark not to sing?