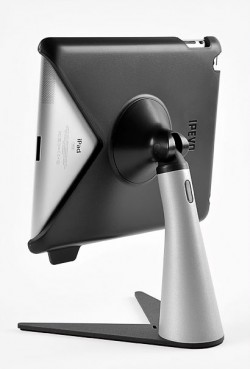 Ipevo has introduced the Perch line of iPod stands – a set of three stands that are designed for use at your desktop, when you’re sitting in a chair or when you’re standing.

We took a look at the desktop version, right, which seems like the version mostly likely to be of use to musicians.

The Perch Desktop Stand can hold an iPad in a variety of positions. The head can swivel in two directions:

The Perch lifts the iPad high enough off your desk that you could use it over a MIDI controller or even most keyboards. The clearance between the bottom of the stand and the desk varies between about 2″ to 8″, depending on how you’ve got the stand positioned. The base thickness is about 3/16″, so it will slide under devices that allow that much clearance.

The multi-position iPad holder includes cut-outs that give you access the various iPad controls while it is in the stand.

Here’s the official intro video for the Perch, which shows all three sizes: 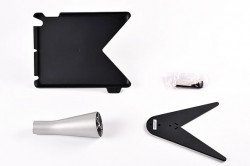 The Perch iPad stand is nicely crafted, with critical parts fitting together tightly and components finished attractively. The base is steel, with a non-slip pad on the bottom. The leg is heavy aluminum.

The stand comes in three parts, but assembly takes less than a minute. You attach the leg to the base with one screw, with a wrench that is included. The swivel head snaps into the leg.

The Perch Desktop Stand is very stable. It held the iPad securely when we tested it as a control surface. If you want to do use this for beatmaking and have a heavy finger, you may want to try it out and see how it works for you before you buy one.