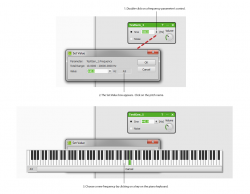 Developer Ross Bencina let us know that a new version of AudioMulch – an interactive sound design and performance environment for Mac & Windows – is now available.

Details on the release are available at the AudioMulch site.

This release also marks the launch of a new community patch sharing area at AudioMulch.com where AudioMulch users can share sound processing patches and compositions.
Other enhancements include:

You can download a 60-day trial at the AudioMulch site.

Bencina also let us know about a couple of AudioMulch user profiles: