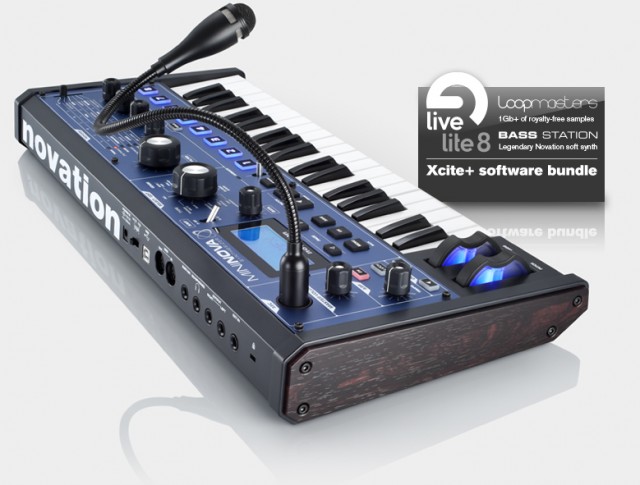 The Novation MiniNova is a compact synth with the same sound engine as its big brother; the UltraNova.

We’ve got photos, videos and specs below. Check it out and let us know what you think of the new Novation MiniNova!

The Novation MiniNova comes with 256 presets that you can tweak with five knobs, or totally with eight ‘animate’ buttons. It offers up to 18 voices, with as many as five synth effects on each sound.

The MiniNova offers 14 conventional waveforms to choose from (square, sine, sawtooth, pulse, triangle and combinations), 36 wavetables and 20 digital waveforms. Each of the 3 oscillators (per voice) have density/detune for fattening up sounds, virtual sync and ‘hardness’ – which acts as an additional lowpass filter.

There are 14 filter types (and you can run 2 simultaneously), 6 envelope generators, 3 LFOs and 20 modulation slots where you can link modules of the synth engine together to shape sound. MiniNova can also add up to 5 effects to each sound including distortion, reverb, chorus/phase, delay, compressor, EQ and Novation’s unique gator effect.

The Novation MiniNova also has an onboard VocalTune, effect as well as a classic vocoder.

Here are some intro videos for the MiniNova. The first video looks at selecting sounds on the MiniNova:

The second video looks at performance features of the MiniNova:

Finally, the last video looks at the MiniNova’s vocoder and VocalTune effects:

Total of 66 Destinations including:

The Mininova will be available in October 2012, and will be priced at £299.99. See the Novation site for details on the MiniNova.