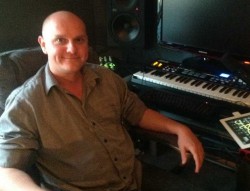 In addition to getting Dittmann’s perspective as one of the creators of AudioBbus, we thought it would be useful to get the perspective of an early user.

Reader Tim Webb has been working with with Audiobus during its development. Webb is familiar to many Synthtopia readers for his review and tutorial videos on YouTube, and the posts at his site, discchord.

We asked Tim about his experiences using Audiobus, and his thoughts on how it will impact mobile music making.

Synthtopia: Tim, what kind of things you can do with Audiobus that you couldn’t otherwise do?

Tim Webb: iOS has seen so much growth in the music app space that the average musician with an iPad will have pages upon pages of apps. This is great, we’ve seen some amazing innovation in apps, but the second we want to put it all together, we have to go running to our computer’s audio interface.

Developers have been getting clever, coming up with new ways for us to actually make use of all of these apps. Last year, developers worked together to make use of the Virtual MIDI API, so we can have a lot of apps playing together nicely and keeping the same clock, exchanging notes, CC, etc…

That’s been great! We’ve also had Sonoma’s AudioCopy/Paste technology, for transferring loops and samples between apps.

However, you can’t really combine these two technologies effectively. You can’t just hit the play button in your MIDI sequencer app, and have everything recording to separate tracks in a DAW app, for instance. Some apps don’t even have an internal recorder that can be triggered by MIDI, so even if you wanted to try to hack a work around; it just wouldn’t be possible to use some apps in this context.

Audiobus is the missing link between having a MIDI source tell your apps to sing, and having a multi-track app record them all. Now, the apps that are being driven by your MIDI source can all be directed, through Audiobus, to send their audio to the recorder’s inputs.

I’d like to point out that, despite some comments here on Synthtopia, Audiobus will not be limited to any specific recording app. The only question of support is up to developers, who choose to implement it in their apps.

The SDK is totally free, so apps of every price/budget can get in on this.

Synthtopia: What about app support?

Tim Webb: Although I cannot mention specific apps, I can say I’ve seen developers’ reactions to Audiobus. Your favorite recorder app will support Audiobus. It doesn’t matter which! They will all support it.

Even fucking fart apps are going to want to support Audiobus.

This sort of technology gets every developer excited. This is a new frontier and they want to be a part of it. More importantly, you’re going to demand it! Just like MIDI and AudioCopy/Paste have become standard, Audiobus will be an expectation of all professional music apps.

Synthtopia: What do you think Audiobus is going to mean for iOS music making?

Tim Webb: Since we already have a lot of apps that fill roles like sequencer, synth, and recorder, there are a lot of people looking for ways to innovate in crowded iOS market. We’re already seeing that in some wildly original synths like Animoog, PPG WaveGenerator and TC-11.

One of Audiobus’ features that is particularly interesting to me is the effects slot, where I think we’ll see a whole new class of apps emerge. This is an app Audiobus can send audio to, before the ultimate destination.

Previously, an app was either a sound source or a destination. Very few apps are designed to be specifically used as just an effect in between your source and destination. To succeed with an app like that, you essentially have to rely on the user having access to an audio interface. There have been a handful of guitar apps that do effects and amp modeling in this way, relying on an interface to bring the guitar in and then output the audio. Now we can have apps that are designed exclusively for use with other apps, for dedicated effects engines.

And this is already happening! A little prototype app has been used, during Audiobus’ development, to add a filter in between the source and recorder app. When Audiobus gets into the hands of more developers, we’ll see a whole new world of apps.