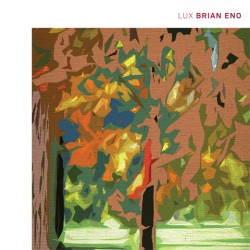 On LUX, Eno expands upon the types of themes and sonic textures that were present on such classic albums as Music For Films, Music For Airports and Apollo: Atmospheres and Soundtracks. Eno sees it as a continuation of his Music for Thinking project that includes Discreet Music (1975) and Neroli (1993).

LUX is a 75-minute composition in twelve sections that evolved from a work currently housed in the Great Gallery of the Palace of Venaria in Turin, Italy. The album is Eno’s third for Warp, following two collaborative albums Small Craft on a Milk Sea (with Jon Hopkins and Leo Abrahams) and Drums Between The Bells (with Rick Holland).