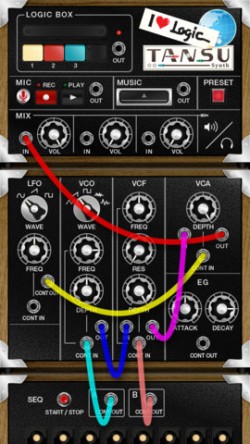 The sounds that were sampled and used for the VCO (Voltage Controlled
Oscillator) come from the actual “TANSU” owned by Hideki Matsutake (Yellow Magic Orchestra, Logic System).

Note: Unfortunately, TANSU has a major downside because of it used of sampled material. The developer notes “Commercial use of the works created by using this application is subject to the copyright clearance from right holders.”