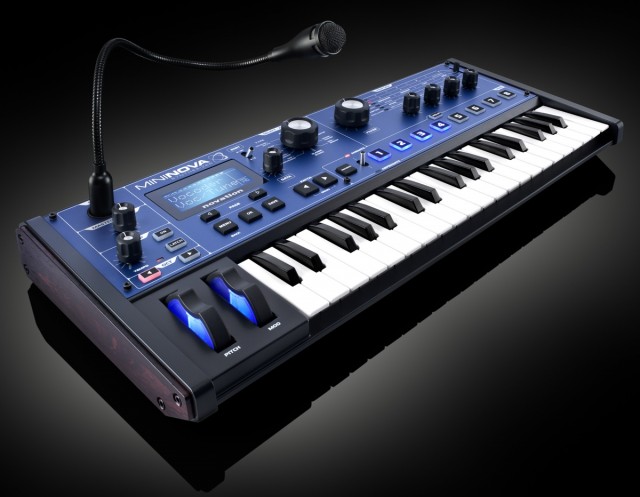 This summer, Novation surprised many by announcing a new mini-synth, the MiniNova.

Key features of the MiniNova include:

Novation sent us one of the first MiniNova synthesizers out of the factory. And after playing it, patching it and programming it, we’re impressed.

We haven’t been able to test the MiniNova’s Editor or Librarian software, which are still to be released. These should make it easier to create new patches and to load additional patch libraries.

For now, then, here are our initial impressions of the MiniNova. We’ll plan on following up with a more comprehensive review once the MiniNova software is available.

The Novation MiniNova is a mini-synth that seems to take some cues from the Korg microKorg. Like the microKorg, the MiniNova is designed to be enticing to beginners, with a clear layout, a genre patch selector and fun vocoder effects.

While the microKorg is a modern classic, the MiniNova benefits from an additional decade of advances in electronics. This allows Novation to endow the MiniNova with a bigger display, more voices and more power than its mini-synth predecessors. 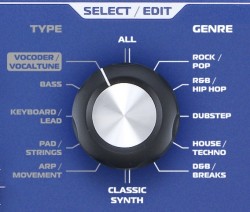 The MiniNova makes a good first impression. A clean design, cool lighting effects and a clear layout make it a synthesizer that’s easy to get started with.

The first thing that most users will want to do is to explore the MiniNova’s 256 presets. Novation makes it easy to browse patches by including a Type/Genre selector, which filters your patches into categories like Bass, Keyboard/Lead, Dubstep and Classic Synth.

The dubstep option may end up making this synth seem dated in a few years, but the selector itself actually works really well. It lets you filter hundreds of patches down to just the category you’re looking for, making it much easier to quickly jump to the patch you want. You can scroll through patches alphabetically or numerically. In addition, the MiniNova also lets you assign 8 patches to buttons on the front panel for instant access.

Another nice feature of the MiniNova is the display: 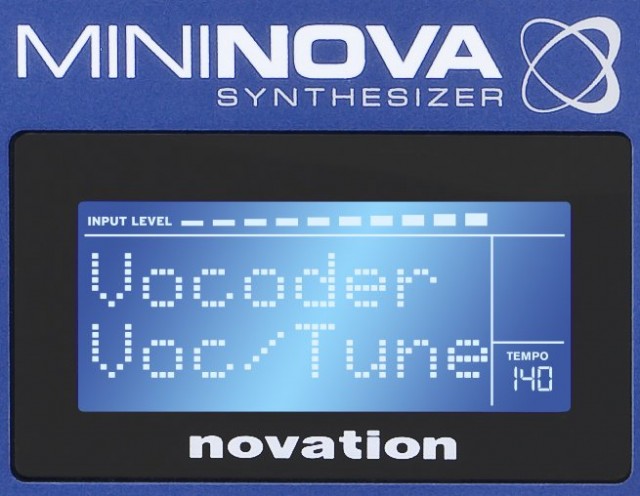 You’re obviously not going to confuse it with the giant touchscreen displays on some of the new flagship synthesizer workstations – but the MiniNova’s display is bigger and provides more information than the displays on older mini-synths.

Along the top right, the MiniNova has a performance control section:

Filter cutoff gets a special place of honor. The Filter knob is huge, single-purpose and physically separated from the other knobs. So there’s no chance of confusing it with anything else when you’re playing.

In addition to the Filter knob, there’s a set of knobs that let the user control another four parameters. These are paired with a slider that selects which row the knobs control (see photo, above). The combination of the slider + knobs gives the user quick access to a matrix of 24 parameters within any single synth patch. For example, you move the slider switch to the Amp Env row, and the four knobs control the ADSR envelope for amplitude.

Four of the six rows of this matrix are assigned to controlling Filter, Filter Env, Amp Env and Oscillator settings. There are also two rows of user-assignable ‘Tweak’ options. The ‘Tweak’ options are edit-able, so the user can decide which parameters are available for live performance.

Below the Perform section, there are the Pad controllers:

These have three main functions:

Like the microKorg, the MiniNova comes comes with a microphone. This lets you use the MiniNova both as a vocoder and as a vocal effect processor.

In addition to these control options, the MiniNova also includes standard pitch and mod wheels. Even these standard synth features have received a little extra attention, with translucent lighting effects.

This wide assortment of controls add up to a generous set of performance options for a synthesizer of this size.

Here’s one of Novation’s MiniNova intro videos that features Harry Coade demonstrating the MiniNova’s range of performance options, including the vocoder, the Animate buttons and the realtime arpeggiator control:

One thing you won’t find on the MiniNova, though, is a place to put batteries. Power options are limited to plugging the synth in or powering it via a USB connection.

The Novation MiniNova is extremely easy to get started with. Just plug it in, switch the Type/Genre knob to whichever category you want and then scroll through sounds.

While the MiniNova presets are good, they don’t fully explore the range and capabilities of the synthesizer. The dubstep basses, for example, lack abrasiveness and, on some patches, it’s hard to hear the effects of various Pad ‘Animate’ mods.

After we dug in and created a dozen custom patches of our own, though, we came away with a much deeper respect for the MiniNova’s synth engine. The MiniNova has comprehensive and extremely flexible synthesis options. Mindblowing options.

Here’s a simplified block diagram of the MiniNova synth engine:

6 sound sources (three oscillators, noise and two ring mod options) feed into a mixer, which routes through configurable dual filters, an amp and then through an effects section with five slots.

This is easy to understand, but when you consider the number of options for each stage, the MiniNova’s power becomes apparent. Here are the key features of the synth engine:

So, for each of three oscillators, you can choose from dozens of waveforms and then you can customize how the six sound sources mix. In the filter section, you can configure two filters, each with one of 14 filter types, in whatever configuration you like (ie., parallel or sequential).

The routing options are extensive, with 20 modulation slots/patch, routable to 66 destinations. Add 5 effects slots, with 7 effects to choose from, and you’ve got the potential for some rich and expressive sounds.

Additionally, many of these sound “building blocks” offer unusual features that introduce a lot of additional potential.  One example is the Density option for oscillators.The Density parameter lets each oscillator create the sound of up to 8 unison oscillators. You can also control the de-tuning of these ‘virtual oscillators’, which lets you create a rich multi-oscillator sound with just one oscillator.

Finally, the MiniNova lets the user select from a variety of Polyphony options and Unison performance options. These options let you do things like assign 2-4 synth voices per note, creating richer sounds at the expense of lower polyphony.

The synthesizer is fully programmable, using the MiniNova’s knobs and a menu-driven interface. There are so many patch options, though, that tweaking a complex patch involves a lot of up-down/left-right menu navigation.

In addition to the challenge of navigating through menus, there are a few places where some software tweaks might make the MiniNova software a lot more usable. One example is the effects section.

The MiniNova software allows for 5 effects slots per patch. When you browse them, they are labeled FXSlot1, FXSlot2, etc. To see if there’s a particular effect assigned to that slot, you have to first select the slot and then navigate a level in to check the effect assignment. What this means is that if you want to do something like cut the reverb on a preset, you first have to navigate into each of the FXSlots to see which one the reverb is assigned to.

It would be much faster if you could see and change the effect assignment without having to play ‘find the reverb’. It would be great if Novation could compress these two steps into one – so that instead of seeing FXSLot1, FXSlot2, you’d see at a glance which effects were assigned where — something like FX1-Chorus, FX2-Reverb.

Ultimately, some user interface compromises are required when you put a complex, powerful synthesizer into relatively inexpensive hardware. Without dozens of knobs and switches at your fingertips, some menu-ing is going to be required.

We’re looking forward to testing the MiniNova Patch Editor when it is released, which should streamline patch creation.

Beyond The Synth Engine

In addition to the deep synth engine, the MiniNova offers several other interesting capabilities:

Hopefully, this ‘first look’ review has given you a good idea of the Novation MiniNova’s powerful feature set, and also some of the quirks that go along with packing so many features into a mini-synth.

We plan on revisiting the MiniNova in greater depth, once the Patch Editor and Librarian software is available, and will offer our final take on the synthesizer at that time.

Based on what we’ve seen so far, though, the Novation MiniNova redefines portable synth power. It’s easy to learn and easy to use, but it offers a very deep synth engine, with a huge variety of synthesis and performance options to explore.