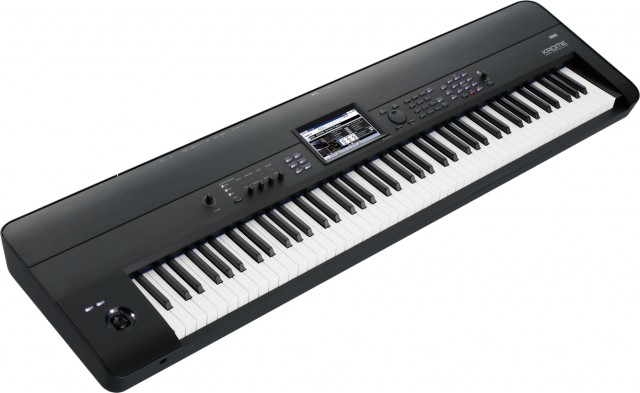 Korg recently introduced a new line of workstations, the Krome series. The Krome workstations start at about $1,000 and have some pretty interesting features, including a full-color touchscreen interface, deeply sampled keyboard sounds & DAW integration.

After the Krome was introduced, though, we found that we had a lot of questions – about its synthesis capabilities, how it compares to the Kronos and how it can work with your DAW or other gear. So, we asked Richard Formidoni, the Technology Product Manager at Korg USA, to answer some questions about the Krome and how he sees it fitting into Korg’s lineup.

Synthtopia: Some people didn’t know what to make of the Krome when it was introduced. What’s your ‘elevator pitch’ for the Krome? How would you sum up what it is and how it fits into the Korg lineup?

It is a direct replacement for the M50, and distills some of Korg’s best workstation features into a lightweight, affordable, great-sounding instrument that is great for live performance as well as studio production.

Synthtopia: With the pricing of the Krome, is Korg trying to bring workstations to a new market?

Richard Formidoni: We do believe that Krome will appeal to a larger audience, because of its bang-for-the-buck ratio. It’s got a lot going for it, and many features that have never been seen in its price range.

Synthtopia: Based on feedback we’ve heard, a lot of people are going to view this as a sort of ‘Kronos Lite’ – even your own marketing materials mention that the Krome features sounds from the Kronos.

How do the two workstation product lines compare? Is there some overlap, or are they really entirely different beasts? What capabilities or features do users lose, going from the Kronos to the Krome?

Richard Formidoni: They are certainly two different beasts, but there are similarities.

The biggest feature from Kronos that also appears in Krome is the large sample collections. With these, Kronos transcends the limitations of traditional PCM-based instruments. Krome takes advantage of the same capabilities, at a much lower price. The 2.8 GB German grand piano, for example, sounds startlingly similar to the larger version found in Kronos. The Jazz Dry/Ambient drum kit is a near-carbon copy of the one in Kronos, down to the separately mixable room mics.

Both Kronos and Krome have Drum Tracks, 16-part Combis, plug-in software integration via USB, and of course the large, color TouchView displays.

Richard Formidoni: OK, this is a big question, so I’ll give you a big answer. In short, the EDS-X engine within Krome has a ton of sound design capabilities.

If you’re looking to start from scratch and build sounds with analog-style subtractive synthesis, you’ll find everything you need in Program mode. Each Program can have two oscillators, and in Krome’s library of multisamples, you’ll find a big collection of single-cycle waveforms (saw, triangle, sine, pulse, etc.) to use as the foundation of your sounds.

If you want to get a little more complex than a single waveform, each oscillator can play up to eight stereo multisamples at the same time. Next, you’ll find familiar synth elements: An amp section, detailed envelopes, LFOs, filters, and of course a huge library of effects. You can also use our AMS (Alternate Modulation Source) system to connect the different elements together in various ways, creating a very “modular” vibe. Tweaking and editing sounds is done via the display. The new input gestures are really useful here… For example, you can actually touch and drag envelope points to create the shape you need.

The next level of Krome’s sound design power comes into play with Combi mode. Here, you can take the program you just created, and combine it with 15 other ones. Those 16 programs can be layered, split, and velocity-switched all across the keybed.

Each of Krome’s preloaded Programs and Combis can be deconstructed and modified as you see fit. You also never have to worry about permanently overwriting a factory sound, because you can recall them at any time from within Global mode. For quick live tweaks, you can always use the X/Y joystick, assignable Switches, and the four Realtime Control knobs. They’re preset to do useful things for each sound, but, you can reassign them to do whatever you’d like.

As far as loading new sounds, Krome can load .PCG files from the Korg M50, as well as its own format. As with all our other workstations, you’ll likely find users creating and sharing their own Programs and Combis online. Korg also plans to make additional sounds available in the future.

Synthtopia: Many of our readers have other synths and MIDI gear that they work with. Can you explain some of the scenarios of how the Krome can be used with other gear?

Richard Formidoni: Korg workstations have always had extensive MIDI capabilities that allow them to “play nice” with other gear.

For example, in Sequence mode, you can set each of the 16 MIDI channels to play an internal sound, a sound on an external device, or both. The hardware controls can also be used to control external gear, as well as the keys themselves.

Synthtopia: For studio use, how do Krome workstations fit into a computer-based production workflow?

Richard Formidoni: The USB port transmits and receives MIDI, making Krome a capable and customizable controller for any software synth.

We also provide freely downloadable Editor/Plug-In Editor software, which allows you to edit Krome’s parameters with your mouse. The Plug-In Editor also works natively with VST/Audio Units-capable DAWs. So, really it’s like adding 16 new software synths, with our hardware doing all the processing instead of bogging down your computer.

Plus, when you save your work in a DAW running the Plug-In Editor, you’re saving the state of the Krome along with it, so it is quickly recalled the next time you load that particular project.

Synthtopia: In your view, what are the most important or unique features of the Krome?

Richard Formidoni: First and foremost is the sound. There isn’t anything that sounds like Krome, and that’s due in part to the huge sample collections, which are larger than any other dedicated music workstation (except our flagship Kronos).

Second is that huge, color TouchView display. The size, resolution, and responsiveness of the new display really draws you in, and the interface is similar to other Korg workstations, so if you’ve played one of our boards before, you’ll instantly know how to get around, but the new touch/drag/swipe gestures add a lot to the experience.

And our Ultra-lightweight 88-key version comes in at a mere 32 pounds! As of the time of this writing, it’s the lightest weight workstation we know of.

Synthtopia: Do you have something on the Korg website that lists the sounds or the range or sounds on the Krome? Are audio demos available on the Web?

Richard Formidoni: Yes, we have audio demos and full documentation on our site at www.korg.com/krome. Just click the speaker icon to hear the audio demos, and click on the “Support and Downloads” link to download the Voice Name List.

Synthtopia: Finally – can you let us know the date when you anticipate the Krome will be available, and what you expect the street prices to be?

Richard Formidoni: It’s appearing in stores as we speak. The U.S. street prices are as follows:

More information on the Kromes is available at the Korg site.

15 thoughts on “A Closer Look At The Krome With Richard Formidoni, Korg’s Technology Product Manager”