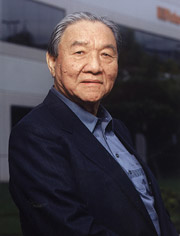 Roland founder Ikutaro Kakehashi, along with Dave Smith, will be awarded a Technical GRAMMY for their contributions to the development of MIDI (Musical Instrument Digital Interface) technology.

Kakehashi had this to say about the GRAMMY:

“It’s already been 30 years since the debut of MIDI protocol in 1983, but it seems to me that those years have passed so quickly. Electronic musical instruments have become very popular all over the world through this time, and it is my great pleasure that MIDI played a significant role in their prevalence,” said Mr. Kakehashi.

“This year’s Technical GRAMMY Award is the result of the cooperation by the companies who worked towards the same dream — growth of electronic musical instruments. I would like to share this acknowledgement with Mr. Tadao Kikumoto, former R&D manager of Roland Corporation, the engineering staff and all who were involved in creating and designing the MIDI concept and system.”

In 1983, Kakehashi and Smith, president of Sequential Circuits, unveiled MIDI. In a rare collaboration between competing manufacturers, what would soon prove an inescapable new technology was born when two competing manufacturers’ electronic keyboards were connected, enabling them to “talk” to one another. Next year marks the 30th anniversary of the launch of MIDI, a standard that motivated the cooperation of an entire industry and helped move music technology into a new era.

Technical GRAMMY Award recipients are determined by vote of The Academy’s Producers & Engineers Wing® Advisory Council and Chapter Committees, as well as The Academy’s Trustees. The award is presented to individuals and companies who have made contributions of outstanding technical significance to the recording field.A special invitation-only ceremony will be held during GRAMMY Week on Saturday, Feb. 9, 2013.

3 thoughts on “Roland Founder Ikutaro Kakehashi To Get Special Grammy”