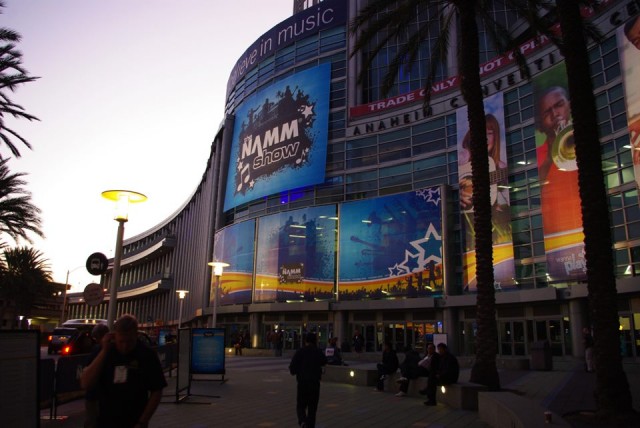 The 2013 NAMM Show was as good as any we can remember, when it comes to new synths and electronic music gear. There were new synths all over, analog made a big comeback, multiple vendors released control voltage devices, there were unique new music controllers and more.

Here are our picks for the best of the show.

These are presented in no particular order, but represent some of the most interesting and amazing new gear of the show. 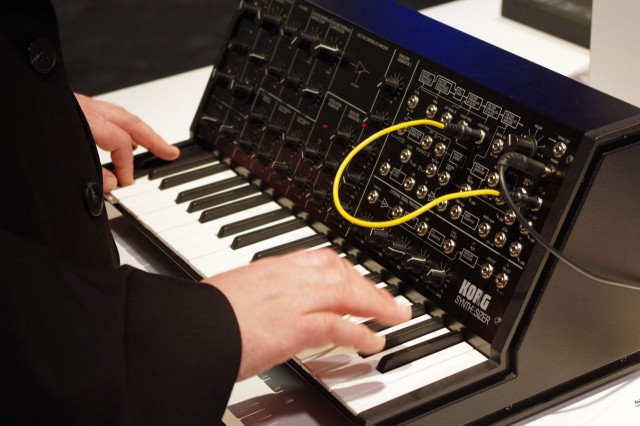 The new Korg MS-20 Mini is a huge hit with Synthtopia readers and turned a lot of heads at the show, too.

For years, readers have been asking companies to re-release their classic synths. With the MS-20 Mini, Korg has not only recreated a classic synth, but they’ve made the semi-modular synthesizer surprisingly affordable, too.

Other notable new monosynths introduced at the show include the new Moog Sub Phatty and the Dubreq Stylophone S2.

Dave Smith’s new Prophet 12 polyphonic synthesizer was a huge surprise at the show, one that had people on the show floor competing for a place to try it out.

It sounds great, and the specs are impressive enough that readers debated whether it might be the best polyphonic synth of all time. Where it sits in the synth pantheon won’t be settled for a long time, but it’s clearly a monster synth to be reckoned with.

Also worth noting is the Elektron Analog Four synthesizer. While it’s been out for a couple months, the Analog Four was introduced with huge buzz in November and the feedback from early users has just sustained that buzz. 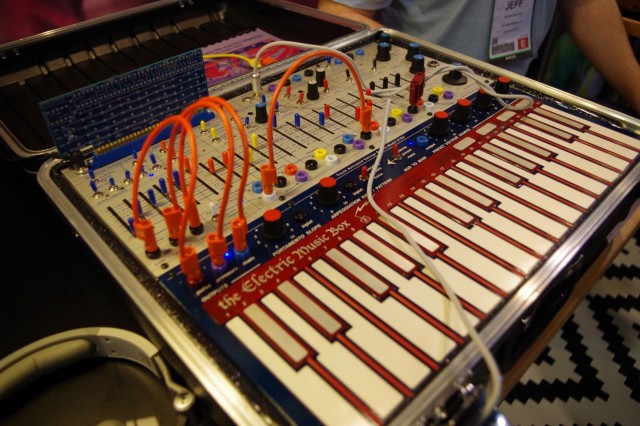 At 4K, it’s not what most of us would probably consider ‘affordable’ but it’s a fraction of the cost of a Buchla 200e system, and it brings a piece of synth history into a new context, where it will be more accessible for a variety of musicians to make new music with it.

The Eurorack Modular Synthesizer was represented in full force at this year’s NAMM Show, with modules on display from dozens of vendors, including audio, video and MIDI controller modules.

More than any one module or vendor, the state of the Eurorack platform is what struck us at the show – vibrant and more alive than modular synthesis has ever been. The modular synth above captures the state of Eurorack modulars in a photo – colorful, complex and full of options.

MIDI interfaces aren’t usually your sexiest piece of gear, but iConnectivity is challenging that by packing the iConnectMIDI4+ with great connectivity options, across hardware synths, software synth, PCs and iOS devices.

Better yet, it charges your idevices and lets you route audio from idevices digitally to your computer. 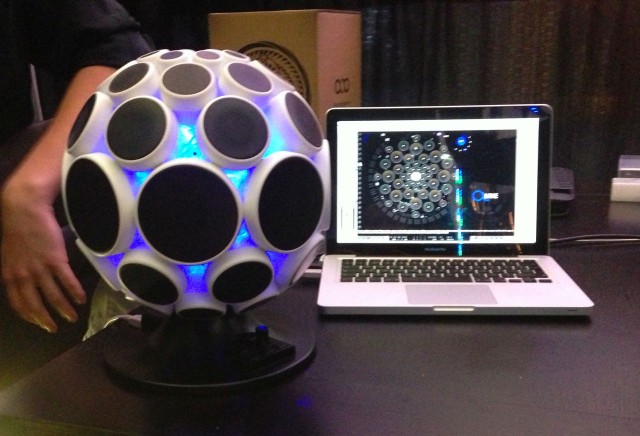 Speaking of MIDI, the AlphaSphere gets our nod for the most creative MIDI controller at the show. Kudos to the developers for taking an original approach to controllers that may encourage users to explore playing in new ways. 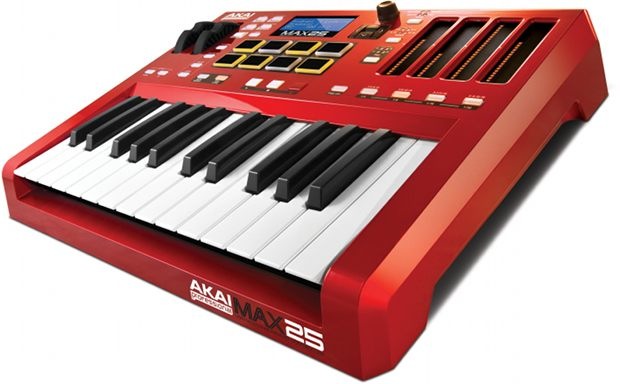 Akai’s MAX25 isn’t as freaky or ‘out there’ as the AlphaSphere – but it is practical, flexible and affordable. Better yet, it’s equally at home being used as a pad controller, a MIDI keyboard controller or controlling control voltage gear. Add in a step sequencer and touch faders and you’ve got a controller like nothing else avalable.

We also were impressed by the controllers that Nektar was showing. Nektar introduced the Nektar P4 controller for Propellerhead Reason just last year, and now they have a full line of three advanced MIDI controllers, including the new Panorama P1. 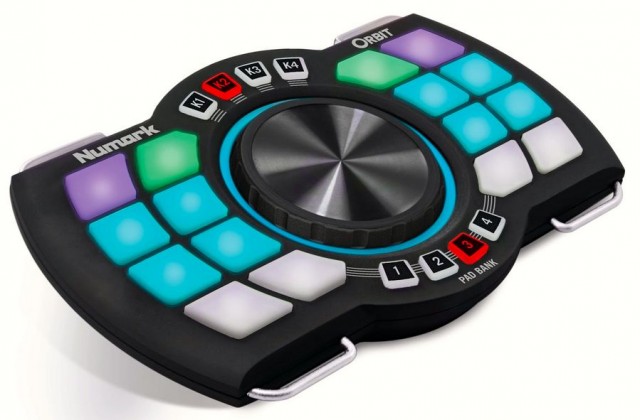 In the area of DJ gear, one of the more interesting new announcements was the Numark Orbit controller. It’s a wireless handheld MIDI controller. They’re marketing it as a DJ device, but it’s MIDI – so we see it as an inexpensive wireless controller that you could use to control about anything that responds to MIDI. It’s got 16 multi-color LED pads, but this is multiplied by 4 bank controllers. We’re looking forward to seeing how people use this. 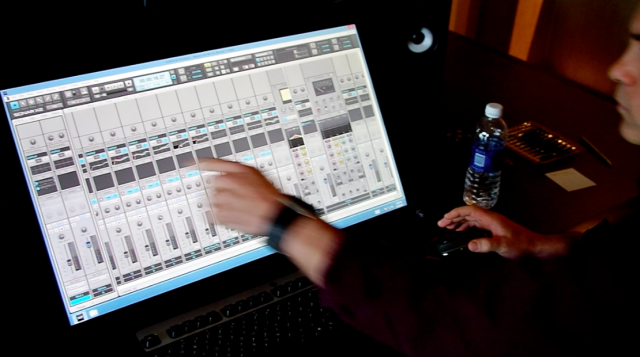 There wasn’t much in the way of official DAW news at this year’s NAMM Show. But Cakewalk was demoing the latest version of Sonar and its new multitouch interface.

Sonar X2a’s touch interface augments traditional mouse and keyboard control, accelerating many actions in the process. Navigation, scrolling through sessions and zooming in on areas to edit are all quick and intuitive using multitouch gestures. As multitouch goes mainstream, Cakewalk is ahead of the competition, pairing the ease of use of an iPad with the power of a mature desktop DAW. 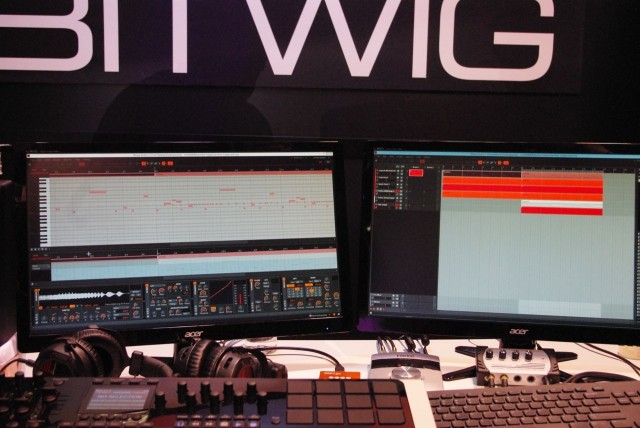 The best software teaser from the show was at the Bitwig booth, where they were demoing Bitwig Studio. Bitwig Studio is packed with smart ideas – it’s like Ableton Live rebuilt from scratch, taking advantage of all the possibilities of a decade of software and hardware advances. While Max For Live is an add-on to Ableton Live, verything is built on a modular framework in Bitwig Studio. It’s happy running on multiple monitors, with multiple sessions open or with multiple people on multiple computers in multiple locations running the same session. They didn’t want to hype Bitwig Studio yet, because they are still beta testing it – but Bitwig Studio hypes itself.

This year’s NAMM Show also saw the reintroduction of the Gittler Guitar – a boutique guitar from the 80’s that dispensed with decades of electric guitar tradition.

The Gittler Guitar is based on the idea that your electric guitar sound should start with the purest signal, absent of coloration, to give each musician maximum control over their tone. Gittler Instruments also claims “the best available synth tracking on the market today”.

Unfortunately, very few vendors were showing software synths, sound libraries or iOS music applications. It would be great if NAMM organizers could figure out a way to make the show viable for more soft synth developers and mobile app developers. The Show is a place where all the major music merchants can come and get an understanding of what’s happening in the world of music technology – and, currently, it’s not a complete picture.

All in all, this year’s NAMM Show was a great one for electronic musicians.

Now that you’ve seen our ‘Best of the NAMM Show’ picks, let us know what you think! Were these the best things you’ve seen introduced this year – or did other introductions impress you more?