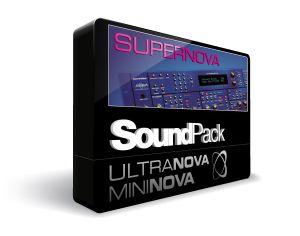 Novation has announced the release of two new free sound packs for their MiniNova and UltraNova keyboard synthesizers. The new Supernova sound banks are made up of sounds from the original 1998 rack mount Supernova synthesizer, created by the Supernova’s original sound designer, Phil McDonald.

McDonald created the iconic sounds of the Supernova that powered classics by Orbital, ATB, Jean Michel Jarre and A Guy Called Gerald, among others.

The first of the two soundpacks, with 64 sounds, is available now, as part of Novation’s 21st Anniversary celebration. The second pack will be released later in the year.

Here is a SoundCloud demo of the sound bank:

The free Supernova sound pack is available from the Novation site. Here’s a video overview of how to install the sound packs:

Supernova sound bank system requirements: To install the Novation Supernova soundpacks, you’ll need the free MiniNova or UltraNova Librarian applications. Use them to import and store new patches and the other soundpacks for both synths, including the Chuckie, Dino Soldo and 2-volume Daniel Fisher soundpacks.