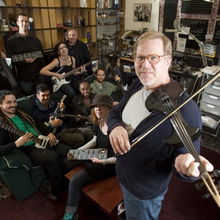 Keith McMillen has been exploring new ideas for electronic music instruments for nearly 35 years, starting in 1979 with his company Zeta Music and more recently with Keith McMillen Instruments. His most recent creations are the QuNeo and the just-released QuNexus controllers.

Synthtopia’s Elisabeth Lewin talked with McMillen about development of the QuNeo and QuNexus controllers in part 1 of our Keith McMillen interview. In part 2, McMillen answers some reader’s questions on his instruments, discusses the state of MIDI, talks about performing with his own group and more.

Synthtopia: One of our readers asked, “What synths or software synths do you recommend using with your QuNexus controller?”

Keith McMillen: What synths? You know, we kind of passed on that by supporting all synths. We put in CV support and you can plug a MIDI expander into it, too.

Musicians are pack rats, a lot of them don’t ever throw or give any instrument away. And there’s a big resurgence in CV synthesis. And I think that people work differently if they have knobs and sliders and a bunch of patch cords in front of them.

For me, I don’t really have a preference for which synth people use with QuNexus. I think that there’s value in pretty much every version of synth that’s come out.

Keith McMillen: (Laughs) That’s treacherous. I didn’t want to step in that one.

Synthtopia: You dodged that handily! Okay. Another Synthtopia reader asked when or whether there’ll be a Max developer kit for the QuNeo.

Keith McMillen: We are producing a developer kit for the QuNeo. It’s progressing and I expect something to be available within months.

It will expose the raw sensor data, will allow you to have increased resolution and will be for hackers and programmers etc. And, with our latest update for QuNeo, v. 1.22 — all of the scripts, python scripts, etc, are included in a non-compiled form, so that people can experiment with them.

We like that, but it takes time to support those additional releases with documentation, we do have to test them and make sure that they work. So the QuNeo scripts will be out probably in — perhaps a matter of days? — and the development kit, probably in a matter of months.

But as you probably know, most musicians never go there [to use a developer kit]. So financially, we have to focus our efforts to support the needs of the many. And we spend a lot of time integrating our products with software, and we are getting more and more software developers to include the QuNeo and QuNexus as supported input devices. And there’s a real need for that.

You know, a lot of controllers only work with one type of software, and I understand that’s a nice controllable universe, and it’s repeatable, and you know what you need to learn. But, with the flexibility we have, it’s a challenge.

[With] Most controllers of any type up to now, you do one thing, and you get one result, one MIDI message. You hit a key, you get a note. You move the bend wheel, you get a bend message. But, when you hit a pad on the QuNeo, four messages go out. You continue to press the pad, or relocate or move your finger around, you continue to output messages. And a lot of the software out there doesn’t know how to deal with that.

So, to go back to touch on your question about synths for a minute, I think the ones that allow for more control info are better. And we’ve had to solve that problem,  so that we can train software. People seem to understand that, … but it’s unfortunate that that is a necessity. Hopefully, it will inspire others to make more responsive synths!

Synthtopia: What are your throughts on MIDI and the current state of music controllers?

Keith McMillen: MIDI is 30 years old this year, and continues to serve us well. And I don’t think that MIDI will go away – nor should it.

If you look at parallels in other computer-based representations of human information, in the early 60s there was a standard, ASCII, and it basically set up communicating written information. It’s a lot like MIDI is [used] for communicating music information.

That’s where we are with MIDI.

We can transmit a note number and that is always going to be important, but I think we also need to be able to transmit the ‘color’ of the note and the character of the note, and the evolution of a note over time – and that’s going to take new standards. 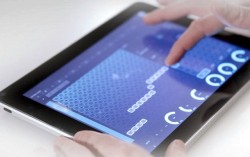 Synthtopia: Thinking about that evolution from ASCII to PostScript, changing technology removed barriers to access. Typesetting and layout were no longer the exclusive province of the typographer, the color separator and the designer. Anyone could get a copy of PageMaker and a laser printer and create their own publications.

Some people argued at that time that the widespread adoption of desktop publishing lowered the overall quality of communications media, because, all of a sudden, anyone could be a publisher. And some make the same argument about today’s music technology  – that it’s dumbing down music.

What are your thoughts on this democratization of technology and its impact on music?

In 1929, something like 30+ percent of American homes had a piano in it. But the presence of a piano in amateur musicians’ homes did not reduce the virtuosity of great instrumentalists, then or now.

It is entertainment for some people to create their own music; it’s musical and artistic expression for others.

I think the availability of affordable instruments has always been part of what technology brings, whether it’s a hurdy-gurdy or a synthesizer. If people want it, someone will figure out how to make it available.

Want to know what I think is a really troubling trend? Education has suffered.

Because of that, fewer people are learning music, learning the basics and understanding what goes into music. And that affects the variety and the quality of the music we have present in our society.

But I don’t think that there’s any danger of artistic virtuosity going away, just because more people have these things.

Synthtopia: You founded a non-profit organization, BEAM, with a mission to “spark a new Western classical music movement, based on the technologies and aesthetics of the 21st century.” And a variety of music technologists, from Max Matthews to Tom Oberheim to Jaron Lanier have expressed their support.

Tell us about BEAM and what you hope that it can accomplish.

I sold a company in 2005, Octave, and was able to put a lot of money into BEAM. We did a lot of work in a few years and made a lot of progress in a towards the goal stated.

But the BEAM target overall is not different than the KMI target. We need new instruments, we need greater responsiveness, we need to understand what is important in controllers and how to organize information, how to communicate that information, and all of that is necessary for the goals of BEAM to be realized.

So, these two complement each other. I’m working mostly on advancing KMI, but still continue to push the agenda of BEAM forward, through talks and work that is taking place outside of KMI.

Synthtopia: You perform with a group called TrioMetrik, which seems to be not just a modern music ensemble, but also a sort of platform for composers, based on networked musicians and new instruments.

Can you tell us about TrioMetrik and how it relates to your work with KMI?

Keith McMillen: Surely. Well, one member of TrioMetrik, Ashley Adams, has been working with me since the late 90s, and is really fantastic at integrating technology into performance. She’s been a touchstone in knowing if I’m on the right track or not. 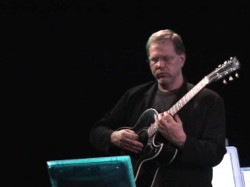 This goal of having networked musicians with traditional stringed instruments is challenging, and it takes not only the instruments but the compositional environment, the performance environment, and how data is stored so that pieces don’t fall apart over time – because technology changes.

TrioMetrik has allowed me to experiment and to get composers to write for us – to test the veracity of the concepts, the system, the software and the ease of use / playability.

It’s really kind of like car companies build racing cars – they take ’em out on the track to see how they do. I think Triometrik is the “racing car” that I use to see how well the hardware and software perform.

It’s a lot of fun – and I hope to return to it. And it also inspired work to generalize the information, so that it could affect video, which was new for me, being an audio guy, and I just think there’s so many things that can happen artistically, once the gestures and sound of the musicians are properly digested by a computer and generalized in a way that they can be used to influence the score, to influence each other, to influence the imagery.

It’s a starting point. And I think that’s really where the 21st century music will go – as we integrate networked computers, which is arguably the greatest result of the century’s efforts in technology.

So bringing it to bear on music is my job, and Triometrik is the test vehicle for seeing if it’s working or not.

Synthtopia: What can you tell us about your plans for the future? 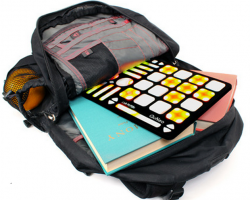 Keith McMillen: Having spent a couple years with Triometrik touring and playing music, it really made it clear to me how inconvenient a lot of gear is, in terms of its weight and size and reliability. So, the practical side of me wants to continue work in that area.

I have some ideas in that area that i hope to “productize” that will make musicians’ life a lot more comfortable and practical in terms of playing “out” and also, in the bargain, not giving the airlines all your money.

Synthtopia: Anything else you think our readers ought to know?

Keith McMillen: Connecting with people who appreciate what we do is deeply satisfying. I hope this provides a little window into the soul of what we’re doing here.

Thanks again – Synthtopia does a great job, and I am delighted to have this opportunity to talk in depth about what we do, and share that with your readers.

Synthtopia: Thank you, Keith. I appreciate you taking the time to answer my questions.

Keith received his BS in Acoustics from the University of Illinois, where he also trained in classical guitar and studied composition. He founded Zeta Music in 1979 and created new guitar effects, the first programmable MIDI audio mixer, and modern violins for the likes of Jean-Luc Ponty and Laurie Anderson. McMillen knew he had made it when a Zeta violin appeared on Playboy’s Sex and Music issue. He notes, “People bought the magazine for the violin article.”

McMillen has also worked as VP or R&D at Gibson Guitars, Director of Engineering at Harmon Kardon and as founder and CEO of Octiv, a provider of audio signal processing technology. McMillen sold Octiv to Plantronics in 2005.

Since then, he has founded BEAM, a non-profit dedicated to promoting new music, and Keith McMillen Instruments, a new music technology company. Recently, McMilen has helped pioneer the use of Kickstarter as a tool for funding new instrument development, successfully funding and developing the QuNeo 3D MultiTouch Pad Controller.

A timeline of McMillen’s work is available at his site (pdf).