Today Novation has announced its new Launchpad Mini, calling it “the Launchpad for the iPad Generation.”

Launchpad Mini is a compact version of the Novation Launchpad, featuring 64 tricolor launch pads and 16 performance buttons that enable the user to produce and perform music with an iPad (as well as the PC or Mac) by playing loops and effects.

Launchpad Mini works with the free Launchpad iPad app to play loops and to control “DJ-style” effects. Users can also download sound packs from within the app, and, with an update, import the users’ own samples.

Launchpad Mini At A Glance: 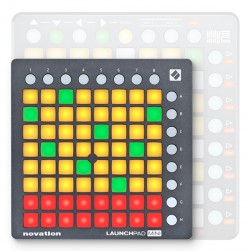 Launchpad Mini is powered by the iPad, and to which it is connected via the Apple Camera Connection Kit (which is not included).

The Novation Launchpad iPad app integrates with the new Launchpad Mini, and comes with pre-loaded loops and samples for immediate use. Users can add to the collection with additional sound packs.

Launchpad Mini is bundled with the following software:

Pricing and Availability. The Launchpad Mini will be commercially available in October 2013, and is being offered at a suggested retail price of $124.99 ($99.99 street). For more information, consult the Novation website.