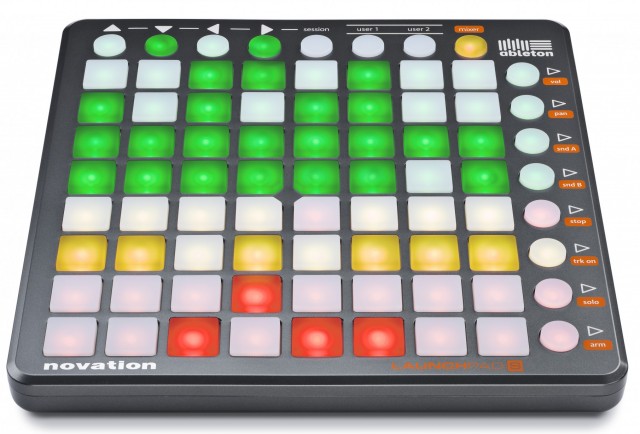 Here are the main improvements in the LaunchPad S over its predecessor:

Is the new LaunchPad a worthy successor to the original? And does it make sense to upgrade? Let’s take a look…….

The LaunchPad S As A Live Controller

The Novation Launchpad has been a best-selling MIDI controller, because of its great combination of controls, LED feedback and affordable price tag.

The new Launchpad S doesn’t mess with a good thing, sticking close to the original’s design, but offering some incremental improvements for Ableton Live users. The key benefits of the new version for Live users are the brighter LEDs and the faster refresh rate. 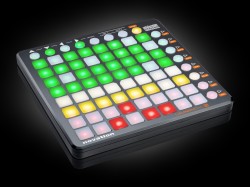 It’s important to note that the Launchpad S has two power modes, low and full:

Low-power mode is selected by default and has the benefit of allowing the Launchpad S to be bus powered by an iPad or a passive USB hub.

In full-power mode, the LEDs are far brighter. This mode is recommended if the Launchpad S is being used with a standard desktop/laptop computer, and particularly in daylight. The Launchpad S will not work with an iPad if it is in full-power mode unless a separate powered USB hub is used.

The LED’s are plenty bright for normal use in low-power mode. If you’re going to use the Launchpad S in daylight, though, you’ll want to switch it to ‘full power’ mode. This is detailed in the Launchpad S Advanced Features Guide (.pdf).

Here’s a photo that compares the LED’s of the Launchpad S vs the original Launchpad:

The new Launchpad S, on the left in the photo, features LED’s that are not only brighter, but it can display more distinct colors.

The new LED’s are also designed to be more usable for people with color-blindness, who had trouble distinguishing between the amber and green states of the original Launchpad. On the new Launchpad S, the designers selected LEDs with a color spectrum that spaces the red and the green wavelengths much further apart.

Here’s a performance video showcasing the new Launchpad S in action with Live:

If you’re an existing Launchpad owner, the brighter LEDs and the faster refresh rate may not be big enough improvements to justify upgrading. The third new feature, MIDI Class Compliance, might tip the balance in the Launchpad S’s favor, though.

Making the controller class-compliant is a great change, because it makes the Launchpad S compatible, according to Novation, with ‘any MIDI application’. Novation specifically calls out FL Studio, as an example:

Launchpad S integrates with FL Studio’s performance mode, so you can trigger clips and get hands-on control of FL Studio’s powerful new performance zone features. Use the buttons to sketch out beats with drum racks, and assign them to additional functions. 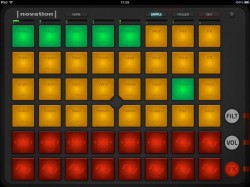 LaunchPad (right) is a free beatmaking app that lets you trigger and manipulate up to 8 audio loops at a time.

Here’s a quick demo of the Launchpad S hardware controller being used with LaunchPad and Launchkey for ipad:

In our testing, the Launchpad S integrated seamlessly with the Launchpad app – even on an original iPad 1. To do this, you’ll need to have the USB adapter that comes as part of the iPad Camera Connection Kit.

The iPad and the Launchpad S make a fun mobile combination, because both devices pack a lot of power into compact, lightweight formats. And, while using a touchscreen like the iPad’s is great for some things, adding a matrix of hardware controls creates a more tactile and immediate system.

We wondered what other iPad apps the Launchpad S will work with. Here’s what our contact at Novation told us:

Regarding software and apps, our safest message is to say that it works with everything on a computer, but as far as iOS goes it is just our app. If someone wanted to use it with other iOS apps like Auria and Cubasis they can, as it is simply a MIDI controller, but they wouldn’t get any lights as visual feedback.

The bottom line is that it the Launchpad S will work with other MIDI apps now, but officially supported apps will make more effective use of the hardware.

One other thing to keep in mind with its new MIDI support is that, while it’s not necessary to install a USB driver, Novation provides them, to enable some additional capabilities. For example, the standard class drivers on Windows do not allow different programs to use the same MIDI device simultaneously. Installing Novation’s driver allows the Launchpad S to be shared between more than one Windows application at a time.

The Launchpad S is a great update to an already popular MIDI controller. It improves on the Launchpad’s features, while retaining the things that made the original a success.

The key new feature for a lot of people will be Class-Compliant MIDI support. ‘Class compliance’ may not sound sexy, but the fact that you can use the Launchpad S with more apps, more operating systems (Linux) and more types of devices (like the iPad), is.

The Launchpad S has a street price of about US $150. See the Novation site for more details.

If you’ve used the Launchpad S, let us know what you think of it!