Both the S4 and S2 boast an improved look with added control over the newest features of Traktor Pro 2. Additionally, the Kontrol S4 and S2 are both now “plug-and-play” with Traktor DJ for iPad and iPhone.

Traktor Kontrol S4 features a new design with 8 color-coded RGB buttons that trigger and identify loops, cue points, and samples for improved visual feedback. Also upgraded are high res jog-wheels with “aircraft-grade” aluminum plates for increased durability. The advanced Flux Mode feature is now instantly accessible on the KONTROL S4 and S2 via dedicated buttons on each deck, while TRAKTOR PRO 2’s Remix Decks controls can now be accessed directly from the units. 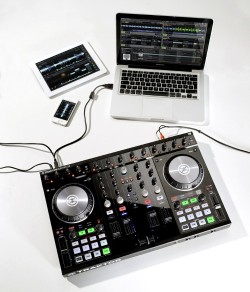 Traktor Kontrol S4 and Kontrol S2 both ship with a full version of the flagship Traktor Pro 2 with Remix Decks software. Traktor Pro 2 offers cue, loop, and sampling functions, a suite of over 30 effects, pro-grade EQs, and fluid playback control of up to 4 decks. Both the S4 and S2 now integrate seamlessly with the Traktor DJ app for iPad and iPhone as well. Both units charge connected iOS devices when in use.