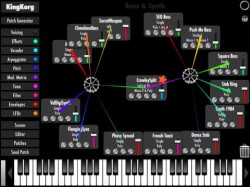 UK developer Richard Meyer and Jazzman Ltd has announced the release of Patch Morpher – a free iOS app which is a  patch generator, editor, librarian and an interactive performance tool for synthesizers

Here is a walk-through video of the app’s capabilities and operation from Richard Meyer, the app developer:

Patches can be organized into “scenes” for live performance, and the musician can “morph or mutate” among the patches to create original new sounds and patches, controlling hundreds of parameters with a finger on the iPad screen, all in real time. The user can even keep directly playing the synth as the sound evolves through the Patch Morpher. 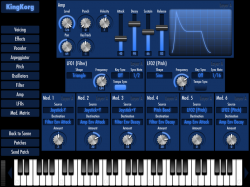 A full editor is available with the Patch Morpher app, allowing the user to further refine sounds via the iPad’s touch screen, controlling and viewing many parameters at once. Patches can be saved to the iPad, conserving storage slots on the synthesizer.

Finally, the Patch Morpher application also provides support for converting patches between the Prophet 08 and the Prophet 12. Developers also say that it allows the user to play the Moog Voyager “paraphonically,” simulating up to three-note polyphony.

Pricing and Availability. Patch Morpher is free for download, and is newly available in the iTunes app Store. Additional features are available via in-app purchase.

Patch Morpher uses Core MIDI, and the Apple camera connection kit and a USB cable, or a MIDI interface, are required to connect your iPad to your synthesizer.

For additional information, check out the Patch Morpher website.