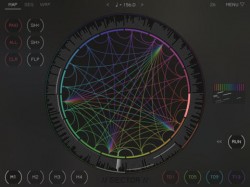 Composer/developer Jonatan Liljedahl (Kymatica) has released Sector – a new app for iPad that lets you slice and sequence your loops with a network of Markov-chain connections.

A Markov chain is a stochastic process where what happens next depends only on the current state of the system.

According to Liljedahl the uniquely visual loop slice sequencer lets you “Get anything between rigid control and random chaos.”

Here’s a preview of Sector in action:

Sector is available now in the App Store, with an introductory price of US $6.99.

My advice to a young musician is choose your plug-ins and your instruments very carefully, and when you have chosen one, try to stick with it for six months.