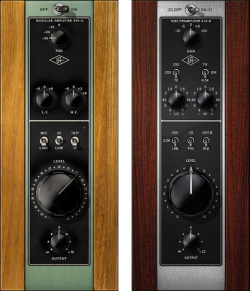 Bill Putnam Sr, founder of Universal Audio, first introduced the 610 Modular Amplifier preamp in 1958. The 610 is famous among record producers for its harmonic detail, clipping characteristics, and ability to overdrive in a warm, musical fashion.

You might not know the model number of the 610, but you would recognize its signature sound: from the Beach Boys’ Pet Sounds to Johnny Cash’s landmark At Folsom Prison album. Its modern counterpart, the 610-B, has more recently helped create classics by Adele and Cold War Kids.

Universal Audio has captured the character and tone of the 610 with its new UA 610 Tube Preamp and EQ Plug-In Collection for the UAD Powered Plug-Ins platform and for Apollo audio interfaces.

The 610 plug-in collection includes both the classic 610-A model and modern 610-B hardware, and represents the first comprehensive modeling of this preamp design — including its tube and transformer components and unique distortion characteristics.

Some things just take time. You can’t produce a baby in one month by getting nine women pregnant.