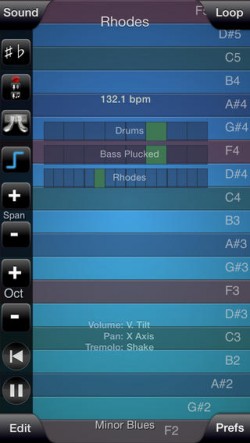 Sonosaurus has released an update to Thumbjam, a performance-oriented instrument for iOS.

Thumbjam is also introducing a variety of features designed to allow much more complex virtual instrument to be built and played on the platform.

Velocity layering support has been added, and new instruments taking advantage of the feature will be available as in-app downloads. The app has also enhanced its MIDI options, allowing for MIDI breath control, poly pressure and more.

Thumbjam is available for US $8.99 in the App Store.

2 thoughts on “ThumbJam Gets Massive Update”

Brosious’ Law – The components you have will expand to fill the available space.