Ableton has released a new pack for Live, Mallets by Soniccouture. 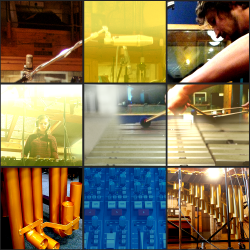 For Marimba, Soniccouture used a Yamaha 6100 model, designed with legendary marimba player Keiko Abe, and recorded different velocities. The nuances of the real instrument are preserved in the pack, and selectable via the macro controls on the Instrument Rack.

Recorded in multiple velocity layers, Marimba retains the natural response of the instrument with all its nuances and subtleties intact. Marimba comes with a selection of presets, each with eight Macro Controls mapped for convenient fine-tuning of filter, EQ, overdrive and reverb settings.

Moving over to the vibraphone, Soniccouture have achieved something new in multi-samples – with samples of its fans both closed and opened and mapped to an LFO, the vibraphone included in Mallets can truly replicate the unique tremolo of the instrument.

With Vibraphone, you can now achieve this natural tremolo effect by using a simple sinusoidal LFO (available as a Macro Control in Vibraphone’s presets) to crossfade between these two different sample layers. This gives you not only the authentic, detailed timbre, but also full control over the speed of the tremolo effect.

All presets in Vibraphone are mapped to eight Macro Controls, so you can also readily tweak effects like chorus, reverb, EQ and overdrive.

Here’s a set of audio examples:

Pricing and Availability. Mallets by Soniccouture is available now via the Ableton store for $89 US.