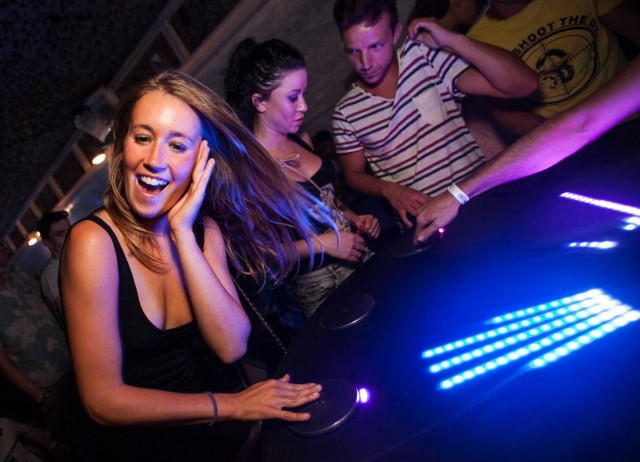 The Orbit controller, below, features 12 independent touch wheels on a large circular table. The touch wheels let people control one channel in an evolving “dj mix” in Ableton Live.

Here’s a video demo for the Orbit:

The goals for the project isn’t to replace traditional DJ controllers, but to:

The  Orbit is basically a giant MIDI controller, with 12 jog wheels, 6 USB interfaces, and visual feedback provided via over 1000 LEDs.

The jog wheels send high-resolution position data to Ableton Live, and display that position through the ring of LEDs around each wheel. When touched, the wheel “reveals” that part and the LEDs immediately in front of the wheel pulse in time with the rhythm of that part.

Orbit is running an extended blend of over a dozen “songs” in Ableton Live. Instead of stereo MP3s, each song is made up of 12 individual parts taken from stems that various artists provided for this installation, including Dubfire, DJ Tennis, Plastikman, Chris Liebing and others.