Sample Logic has announced their latest release, Cinematic Keys. Cinematic Keys is a complete collection of over 850 “traditional and mutilated” instruments and multis derived entirely from recordings of keyboard instruments. 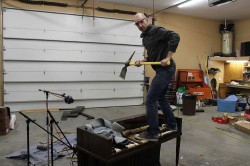 Appetite for destruction. The “bread and butter” of Cinematic Keys is in the inclusion of a large collection of samples derived from the destruction of an upright piano and three toy pianos, all recorded in a large multi-car garage, producing what Sample Logic calls “amazing organic acoustic treatments.” These piano instruments were dismantled and destroyed using an assortment of wrecking tools from a sledgehammer, scythe, and machete, to a blowtorch, “and way beyond,” to create an innovative sound.

New Interface. Cinematic Keys also marks the debut of Sample Logic’s enhanced Kontakt user interface. Easily control eight real-time audio effects from the home screen of every Cinematic Keys instrument. The interface also includes a bypass Arpeggiator, triggers with 64 preset effects, and an LFO section “to make things wobble.” These features come hand-in-hand with the Step Animator engine first introduced in Sample Logic’s Arpology, which allows for sequencing and arpeggiating of sounds over time on a per step basis.

New FX Animator. Building on the breakthrough Step Animator, Sample Logic has now included an all new FX Animator for all audio effects, allowing them to be modulated and sequenced in real-time. The FX Animator also contains up to 150 unique presets. All effect modulation can be made on a per-step basis, and steps can each have different durations, or be synchronized with the Step Animator. 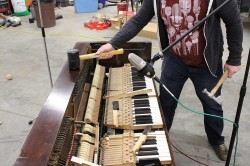 Pricing and Availability. Sample Logic’s Cinematic Keys comes out September 8, 2014. Pre-orders before that date are discounted to $275 US from the regular $349.99 price. More information at the Sample Logic website.