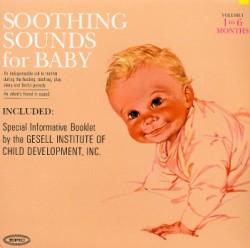 While we’re not sure how many babies or parents were soothed by Scott’s Soothing Sounds for Babies, the albums are sought ought by electronic music fans as pioneering examples of pure electronic music.

Here’s an example, from Volume 1:

The re-release will feature the three discs, in individual album sleeves, shrink-wrapped together with the small booklet that was included with the original release.

The Soothing Sounds for Baby three LP set is priced at € 39,95 via Basta Music.