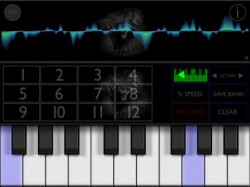 Jordantron is a giant sample collection, wrapped in its own playable instrument, so it can be used as an iPad instrument or as a MIDI sound module.

Jordantron also lets you play it with two MIDI keyboards, one controlling the blendable ‘ABCtron’, the other controlling the ‘Dtron’, which is usually dedicated to chord pads. VOICEBANKs can be loaded using MIDI Program Change, so the iPad screen never needs to be touched during performance.

According to Wizdom, Jordantron will turn your iPad into the ‘most epic sounding instrument ever.”

Jordantron is available now in the App Store for US $9.99.

If you’ve used Jordantron, let us know what you think of it!