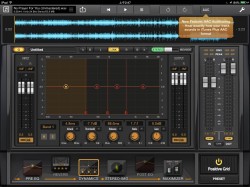 Positive Grid announced today that the new version of its Final Touch Audio Post Production System for iPad is now available with the new AAC format preview, the first of its kind on iPad.

With this new update, Final Touch adds real-time auditioning through the Apple AAC encoder, which provides accurate level metering and preparation for Mastered for iTunes process on a Mac.

Final Touch combines seven mastering tools into one integrated system: Pre and Post Linear Phase EQ modules, a Dynamics module with a “highly flexible” stereo/mid-side multi-band compressor/limiter, Stereo Imaging, Reverb, and a Maximizer with Comprehensive Dithering and noise-shaping options. The final mix can be exported and shared via email, Dropbox, iTunes and SoundCloud.

Pricing and Availability. Positive Grid’s Final Touch for iPad with new AAC preview feature retails for $19.99 and is available for download now via the iTunes App Store. The app requires an iPad 2 or newer to operate. More details available at Positive Grid’s website.