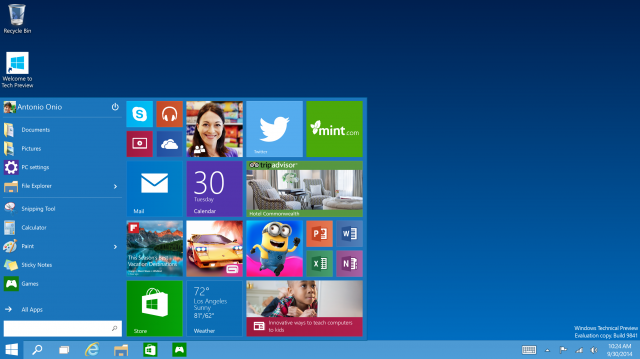 Microsoft today announced the next version of Windows, Windows 10.

According to Microsoft, Windows 10 will run across the broadest range of devices ever. Key Windows 10 features include the return of the Start menu, multiple desktops and improved multi-tasking.

The company did not explain why it was skipping version 9 and going straight to Windows 10, but some analysts are speculating that this is an attempt to distance the brand from the widely criticized Windows 8 release.

For musicians, the biggest feature of Windows 10 may be that it promises to deliver the performance improvements implemented in Windows 8, but with a more familiar user interface.

You can get a sneak preview of Windows 10 from Windows VP Joe Belfiore in the video below:

Here’s what Microsoft has to say about Windows 10:

Windows 10 represents the first step of a whole new generation of Windows. Windows 10 unlocks new experiences for customers to work, play and connect. Windows 10 embodies what our customers (both consumers and enterprises) demand and what we will deliver.

And across this breadth of devices, we are delivering one application platform for our developers. Whether you’re building a game or a line of business application, there will be one way to write a universal app that targets the entire family. There will be one store, one way for applications to be discovered, purchased and updated across all of these devices.

Windows 10 will deliver the right experience on the right device at the right time. It will be our most comprehensive platform ever.

Note that Microsoft is announcing the developer preview for Windows 10, not a general release – so consider this a sneak preview of what’s coming.