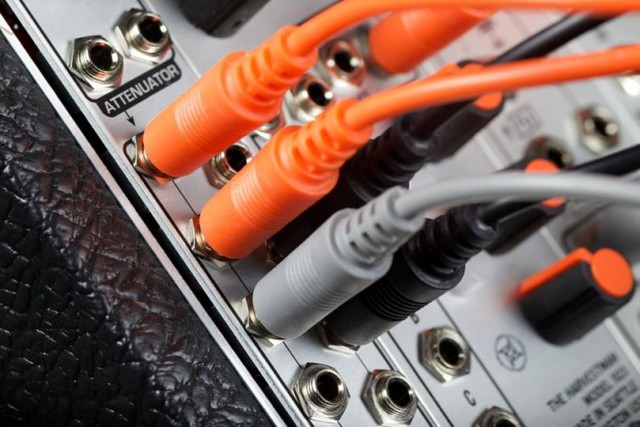 The Harvestman has announced that the a limited number of the Iron Curtain Electronics System – a modular instrument based on the Polivoks synthesizer – are now available.

The Iron Curtain Electronics system was created in cooperation with the Polivoks instrument designer Vladimir Kuzmin.

The Polivoks is a vintage voltage-controlled synthesizer from the Soviet Union, first manufactured in a military radio factory in 1982 from a special selection of components. It later became notorious in the West for its aggressive sonic character.

All modules and system components in the Iron Curtain Electronics System are compliant with the Eurorack format.

The Polivoks modular voice contains temperature-stabilized sawtooth-core VCOs, VCAs, and ADSR envelopes (two each), combined with a noise source, sample-and-hold, LFO, the famous 2-pole filter, and the suboctave circuit from the LIDER guitar effects processor. To preserve the character of the circuits, NOS electronic components from the USSR were used where appropriate.

The Harvestman has added specialized mixer, multiple, and slew limiter modules for patching these circuits into this new modular environment. The Iron Curtain modules have a redesigned user interface towards this goal, with extended controls not available on the original keyboard instrument, such as individually patchable outputs, advanced envelope controls, and a plethora of attenuverted control voltage inputs.

Packaged in a portable desktop cabinet by Monorocket, the modules sit at an angle to the performer, with a large flat area on the top of the case for additional modular cabinets or other electronic instruments to be stacked above.

More Iron Curtain Electronics modules are planned for 2015, continuing the work of Vladimir Kuzmin with selections from his instrument design portfolio.

NOTE: These first systems do not include the pictured KING SLENDER mixer/slew module, available in January 2015 with improved performance. The price has been adjusted accordingly, and early adopters may add this module later at a discounted price.

The Iron Curtain Electronics System is priced at $2000 USD (plus shipping). Send an email to sales (at) theharvestman.org to organize a purchase, please include “IRON CURTAIN” in the subject field.