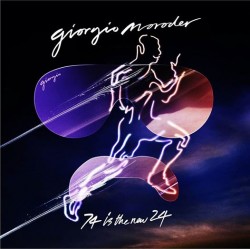 Dance music and electronic soundtrack pioneer Giorgio Moroder has announced plans to release a new album – his first solo album in 30 years – in Spring 2015. The new album will be titled 74 Is The New 24.

In conjunction with announcement, Moroder today released a new video, for the track 74 Is The New 24. You can watch the video or listen to the track via embeds below:

The new single is based off an instrumental track Moroder released earlier in the year as a free download, Giorgio’s Theme.