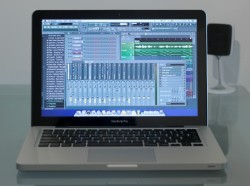 Image-Line has officially announced that it is working on a native version of FL Studio for OS X.

The company had previously tested the waters with a ‘wrapped’ version of OS X – basically the Windows version running in a crossover wrapper that allows it to run on Mac. Now they are moving forward with building a native version.

Here’s what they have to say about FL Studio for OS X:

We started by testing a FL Studio Mac OS X BETA (Crossover Wrapped) version with direct installation on Mac OS X. But this is still a Windows program, running on OS X. The interest in the wrapped beta, and the problems we faced supporting 3rd party VST plugins in it, lead the team to start work on native OS X VST versions of Edison, Gross Beat, Harmless, Harmor, Maximus, Ogun, Slicex, Sytrus, Vocodex. See how to get these plugins here.

The VST plugin testing, was in fact, the start of the FL Studio native OS X compatibility development. The VST plugins use the same code-base as FL Studio itself and if we could get these working to spec on OS X, then FL Studio would likely follow soon after.

Well, the plugin testing is progressing nicely, and so the team has turned their attention to FL Studio 12 itself. It’s a long and slow process and we can’t make any promises, since we may come across unexpected and or unsolvable technical problems. But work is indeed under way. Below are some of the issues we face porting FL Studio to native Mac OS X and explains why this is taking ‘so long’:

FL Studio is written in Delphi with in-line assembly for much of the DSP. This is one reason why FL Studio and its graphics are so fluid.

Delphi only recently got the ability to compile to OS X. So while this is great, it’s a 1st-generation OS X compiler, it’s cranky and sometimes causes problems of its own. But, before this came along, we needed to port well over 1 million lines of code to another language. We never thought that was a good idea, and it’s why we never did it before. But, things have changed, so let’s call this progress.

FYI, just getting all this system dependent code from Deckadance (which was created more or less with porting in mind) and replacing it with bi-platform versions took almost 6 months. FL Studio is many times the size of Deckadance, so please be patient.

Will this impact on the development of FL Studio for Windows?

No, the team working on the conversion to OS X is completely separate from the Windows development team. They talk, but don’t share any bodies that we know of, so it’s business as usual on the Microsoft side of things. Bill Gates sends his regards BTW.

So, bottom line – Image-Line is bringing FL Studio natively to OS X, but it’s too early in the development stage for them to make an announcement regarding a release date.