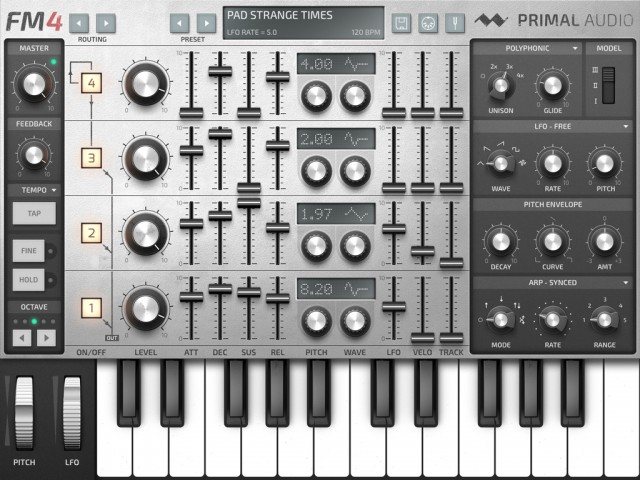 FM synthesizers have a reputation for being powerful, but painful to patch.

FM4 is a four operator FM synthesizer for iPad. FM4 is modeled on Yamaha DX synths of the 80s, but with a modern interface and free of some of the limitations of the original synths’ technology.

FM4 is capable of producing a multitude of sounds, ranging from punchy basses, crystal-clear bells, and lush pads, to organic textures, striking drums, and piercing leads.

According to Primal Audio, every aspect of the hardware — from envelope curves to sine-table sizes and quantization errors to digital-to-analogue converters — has been meticulously analyzed, in order to recreate the sound of the original units.

The interface of FM4 is much more intuitive than the original, putting every parameter on a single page. No menus, tabs, or jumping from page to page.

Note: MIDI is not working in the initial release. The developers say that an updated FM4 that adds MIDI support has already been submitted to Apple for review.

The developers have created an FM ‘manifesto’ to challenge people’s ‘misconceptions’ about FM synthesis:

1) FM synthesis is unintuitive and incomprehensible.

Due to a combination of cumbersome interfaces, poor terminology, and plain calumny, FM synthesis has over time garnered a reputation of being arcane and hard to grasp.

We have put great effort into giving FM4 the most simple conceivable, yet powerfull, interface — with every parameter being available on a single page — akin to early analogue synthesizers.

When the first FM hardware synths came out, only a few people embraced their underlying concept and undertook programming them. Instead they were primarily used for their, at that time enticing, factory presets and commercially programmed banks.

oday FM is still being identified with cheesy electric pianos and farty brass sounds. To put an end to this FM4 does purposely not include a sysex converter.

With FM4 we have taken the opposite approach and analysed and incorporated inherent sonic aspects of original 1980s hardware units, such as the bit-depth of internal sine-tables, quantisation errors, and digital-to-analogue converters.

It is time to reinvent FM and we encourage musicians to dive into and embrace what was formerly considered as /the black art of FM programming/.

FM4 is available now in the App Store for $0.99, through the end of December.

If you’ve tried FM4, let us know what you think of it!