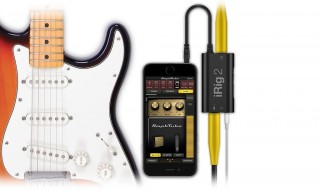 Here are the details….

The biggest update that iRig 2 brings is its new ¼” amplifier output. This augments its 1/8″ headphone output by allowing musicians to use iRig 2 and their mobile device along with their favorite amplifier, without the use of an adaptor. \

This opens up new options, when paired with AmpliTube, IK’s guitar and bass multi-effects processor. iRig 2 now lets musicians use AmpliTube’s library of modeled virtual stompbox effects, amplifiers and other gear as a part of their physical rig.

Made for both practice and performance, iRig 2 comes with a removable support that, together with a Velcro strip, allows mounting of iRig 2 on any mic or music stand,.

IK says that iRig 2 is now ‘widely compatible’ with Android smartphones and tablets.

Its 1/8″ output connector is compatible with many popular Android devices produced by manufacturers like Samsung, LG, Motorola, HTC and more – any device with an 1/8″ input that supports the CTIA/AHJ wiring standard works with iRig 2.

Additionally, users with Android devices that support Samsung Professional Audio can enjoy AmpliTube for Android, a special version of the popular multi-effects processor that brings a full spread of meticulously modeled virtual gear to the Android platform.