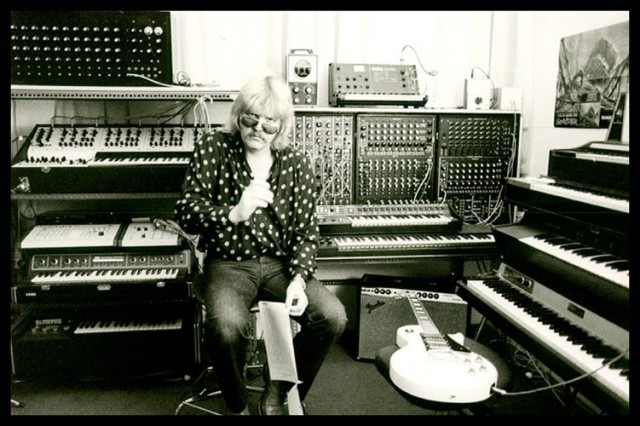 Edgar Froese – the creative soul of the electronic group Tangerine Dream for the last 48 years – has died.

Froese’s death was announced at the Tangerine Dream site:

This is a message to you we are deeply sorry for…

On January 20th, Tuesday afternoon, Edgar Froese suddenly and unexpectedly passed away from the effects of a pulmonary embolism in Vienna.

The sadness in our hearts is immensely.

Edgar once said: “There is no death, there is just a change of our cosmic address.”

Edgar, this is a little comfort to us.

Both with Tangerine Dream and as a solo artist, Froese had an illustrious career.

In the 70’s, Froese ( 6 June 1944 – 20 January 2015) helped define the ‘Berlin School’ style of experimental electronic rock, on Tangerine Dream classics like Phaedra, Rubicon and Stratosfear. In the 80’s, Froese and his band brought a new sound to the art of scoring, on films like Thief, Risky Business and Miracle Mile. Later in his career, he found success in the world of new age music.

In addition to his work with Tangerine Dream, Froese was an active solo artist, on albums like Aqua, Epsilon in Malaysian Pale and Stuntman.

In an interview with The Quietus in 2010, Froese said this about his influences:

Dali was quite a big influence in my life, because his philosophy of being as original and authentic as possible had touched me very intensively at that time. As he used to be incomparable I invested a lot of time, too, in training myself to follow such a philosophical path.

When I met Dali the first time I was 22, a youngster who knew immediately that nearly everything is possible in art, as long as you have a strong belief in what you’re doing.

Froese also attributed his long career to a lifestyle of hard work and clean living:

You can’t work 14-16 hours per day on your musical visions if you’re getting drunk or being a drug addicted person at the same time. It would never work.

So I’ve been a veggy most of my lifetime and have not smoked or drunk for almost 35 years now.

But that’s a decision every artist has to deal with on a personal subjective level.

34 thoughts on “Edgar Froese Of Tangerine Dream Has Died”